Rise Woodfire worker Carlos Granados makes a pizza in the oven for a customer.

Walking into Rise Woodfire is like entering an old train station.

Architecture remains from the downtown San Mateo Train Station, like the tall, wide sides leading to the ceiling and high window panes that allow lots of natural light. Vintage-style station lights are at tables. Caltrain cars barrel along the tracks a few yards outside the restaurant throughout the day. Rather than disrupt the natural ambiance, Rise Woodfire embraced the building’s architecture and created a new and unique restaurant in downtown San Mateo.

Keeping the train station ambiance was a goal of Rise Woodfire owner Omid Zahedi when he opened the restaurant earlier in September at 2 N. B St. He was initially against the location until he went upstairs to saw the roofline and the surrounding views. He realized with work, the site could be a distinctive addition to the restaurant scene in downtown San Mateo, melding his passion for wood fire cooking and creating new spaces.

“I get really excited about turning old spaces into something new; that’s a lot of it for me. When I was able to see that I could do that here, then I started to put together a business plan to come up with something that would support a large space like this other than just a pizzeria, and that’s how Rise Woodfire was born,” Zahedi said.

Zahedi studied the traffic patterns of those who travel in and out of the train station area. He thought there was an opportunity to provide people downtown with a place to eat before going home or working. It could also be a place to relax with family and friends at the end of the day. He developed the 5,725-square-foot space, and his enthusiasm has only grown since construction. The location now includes a full-service kitchen, central bar and outdoor kiosk.

Zahedi is also the owner of Rise Pizzeria in Burlingame, which opened at 1451 Burlingame Ave. in late 2016. He co-owns the Burlingame and San Mateo location with his wife, Susan Payrovi, a physician and clinical assistant professor at Stanford University.

Despite the enthusiasm and potential, COVID-19 delayed construction for several months and pushed back the opening. Rise Woodfire was slated for a May opening until COVID-19. The pandemic forced the restaurant to adjust, make changes and adapt to adversity. The restaurant instead had its soft opening at the end of September. Zahedi has run both his Burlingame and San Mateo location during this time, dealing with closures during the lockdown, reopening on a limited capacity and conforming to new county restrictions.

“It put, for the whole industry, a big black cloud over it, but we still are confident that we have a good product and a good concept, and this is a great location,” Zahedi said. “We are really grateful to be in this space and be able to convert it into a much more grand space than what it was before.”

Despite the troubles of COVID-19, Rise Woodfire started its operations with a soft opening for their dining room about three weeks ago. They now have a grand opening planned for mid-November. They have about 18 people on staff. Nearly half of their orders are now from takeout, and they are carefully implementing changes based on input from staff and customers.

The restaurant’s final construction project is focused on getting the patio area opened up, which will allow them to reach a bigger capacity. The patio area will include another kiosk bar and a coffee bar to help anchor the space. Rise Woodfire will also have party spaces that can fit around 120 people in a post-pandemic time. Zahedi believes they are close to a full-scale opening in the third week of November, around Nov. 16, when workers complete construction on the patio. 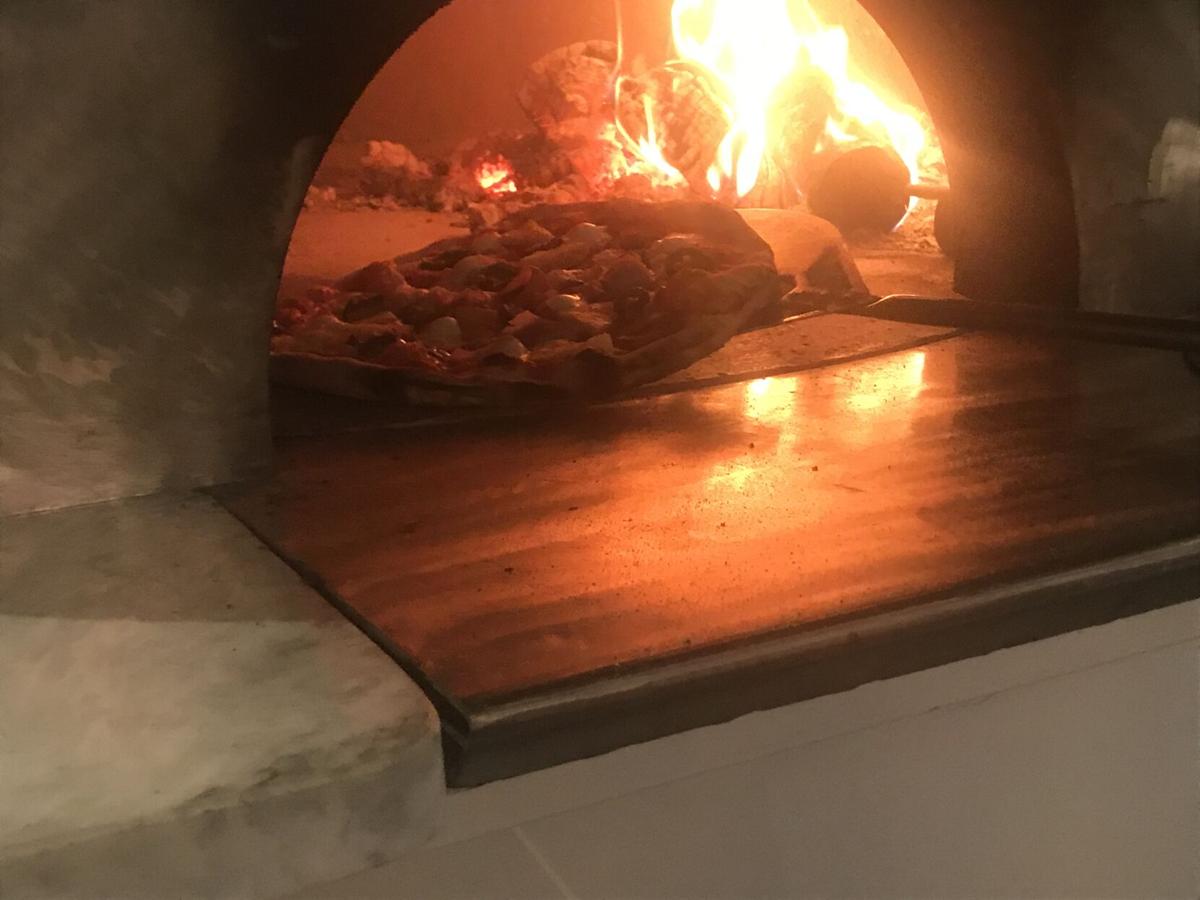 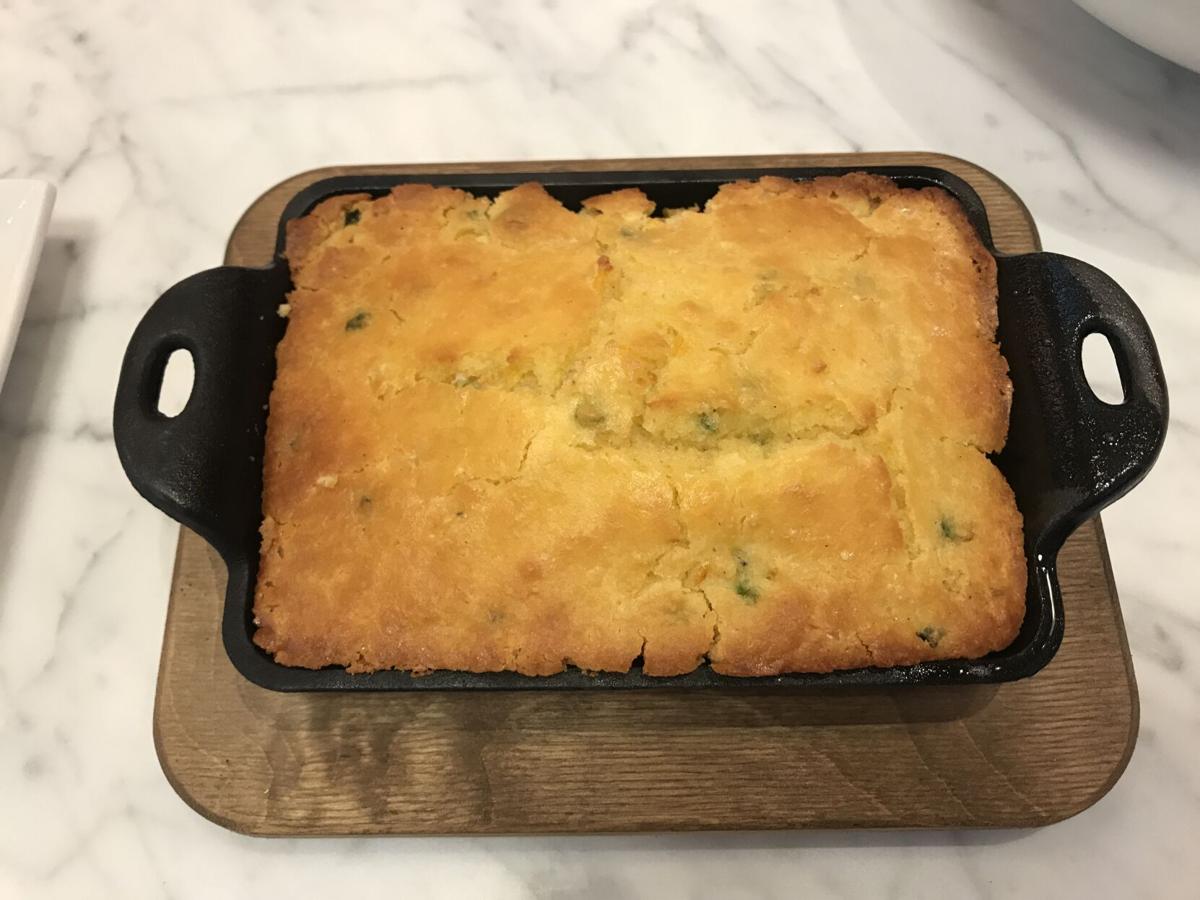 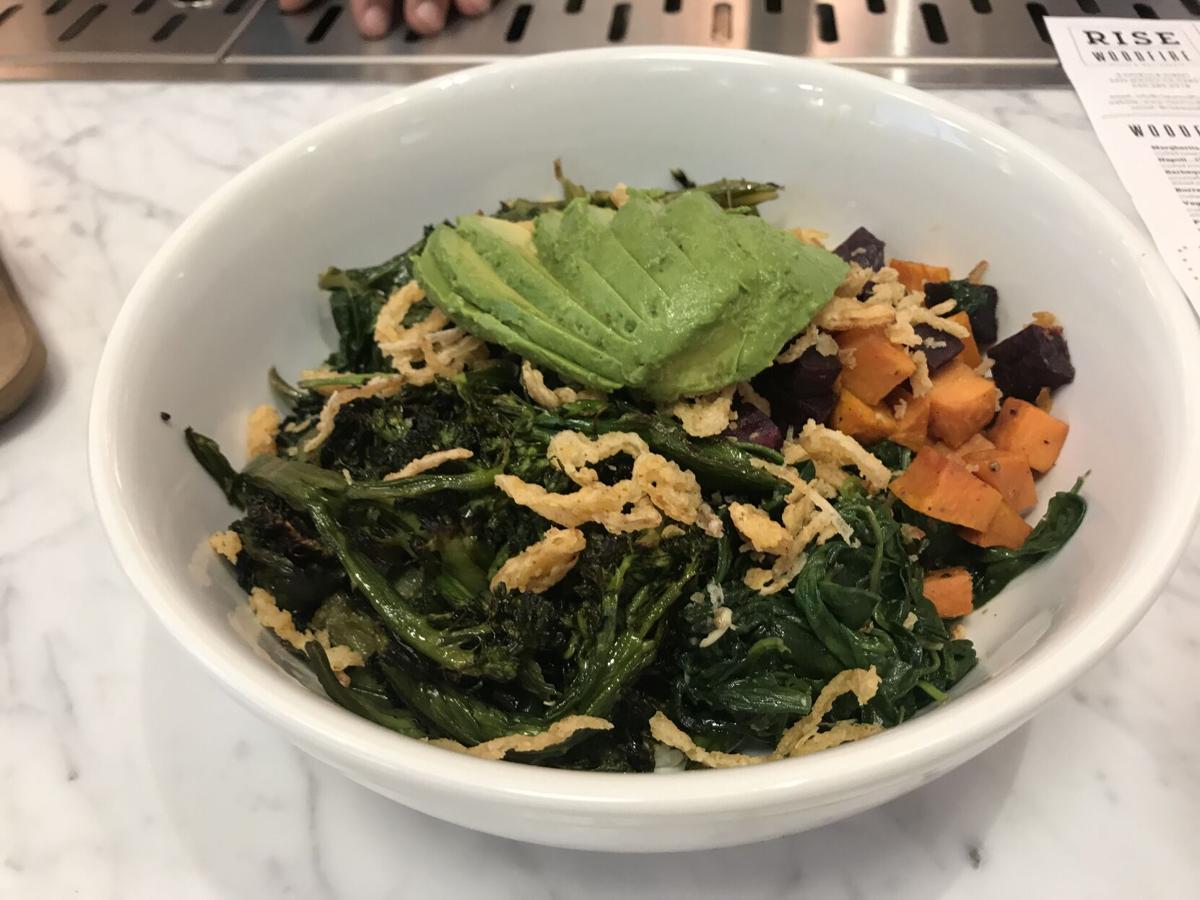 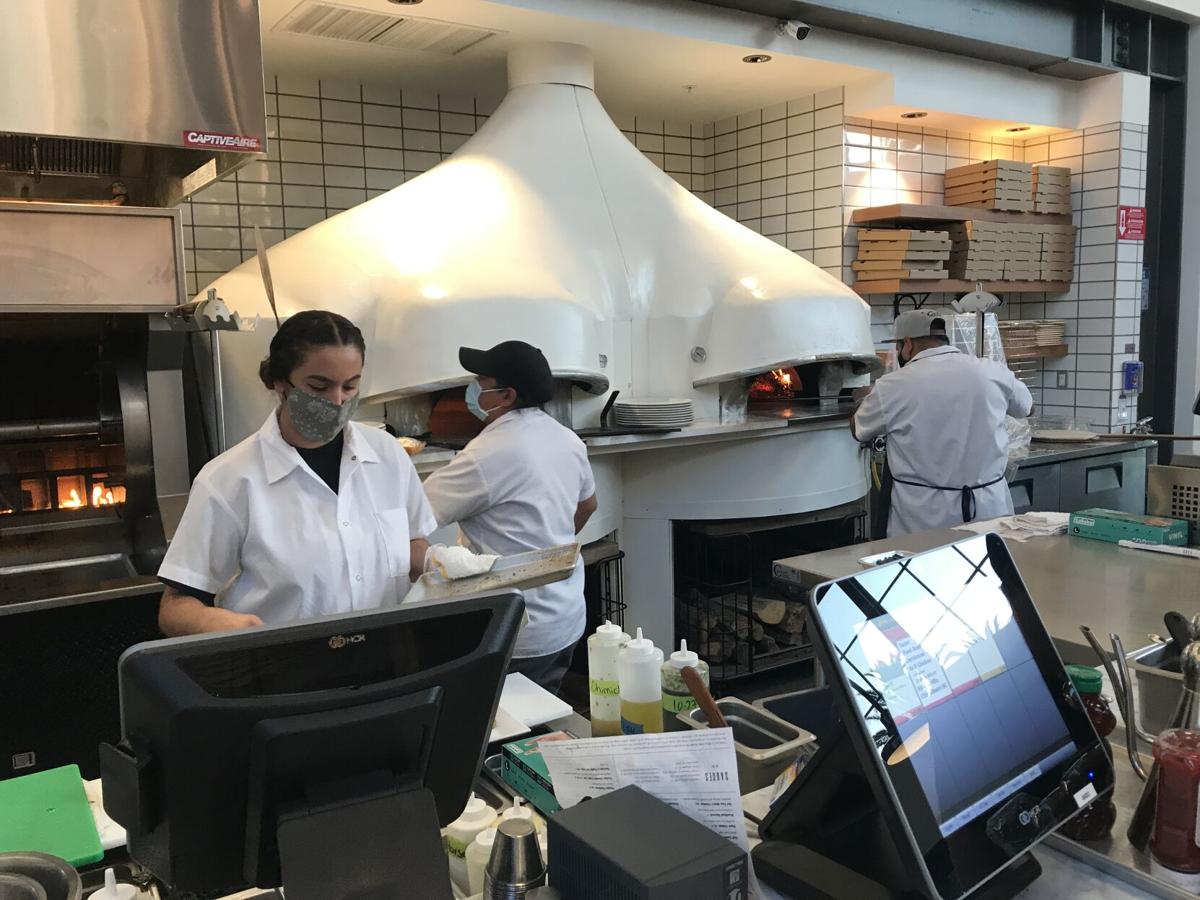 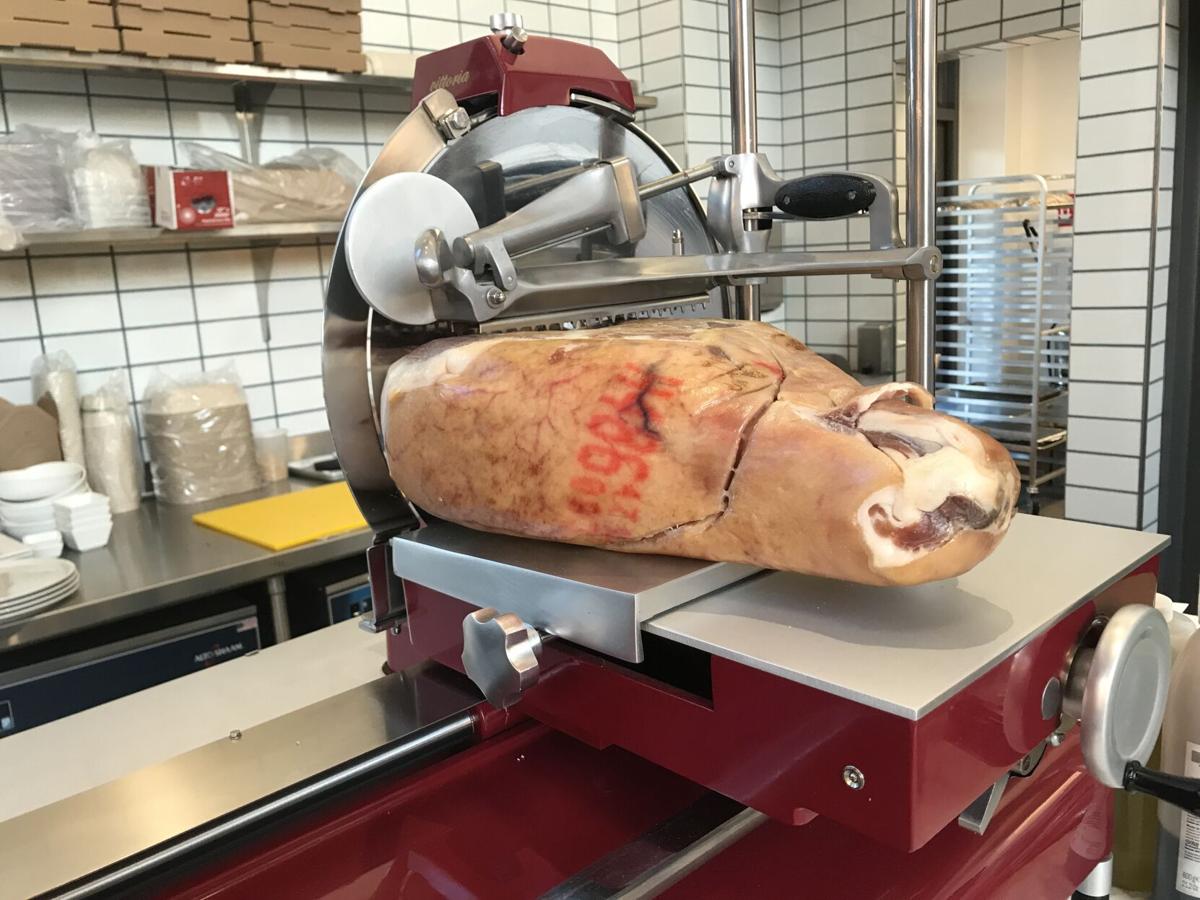 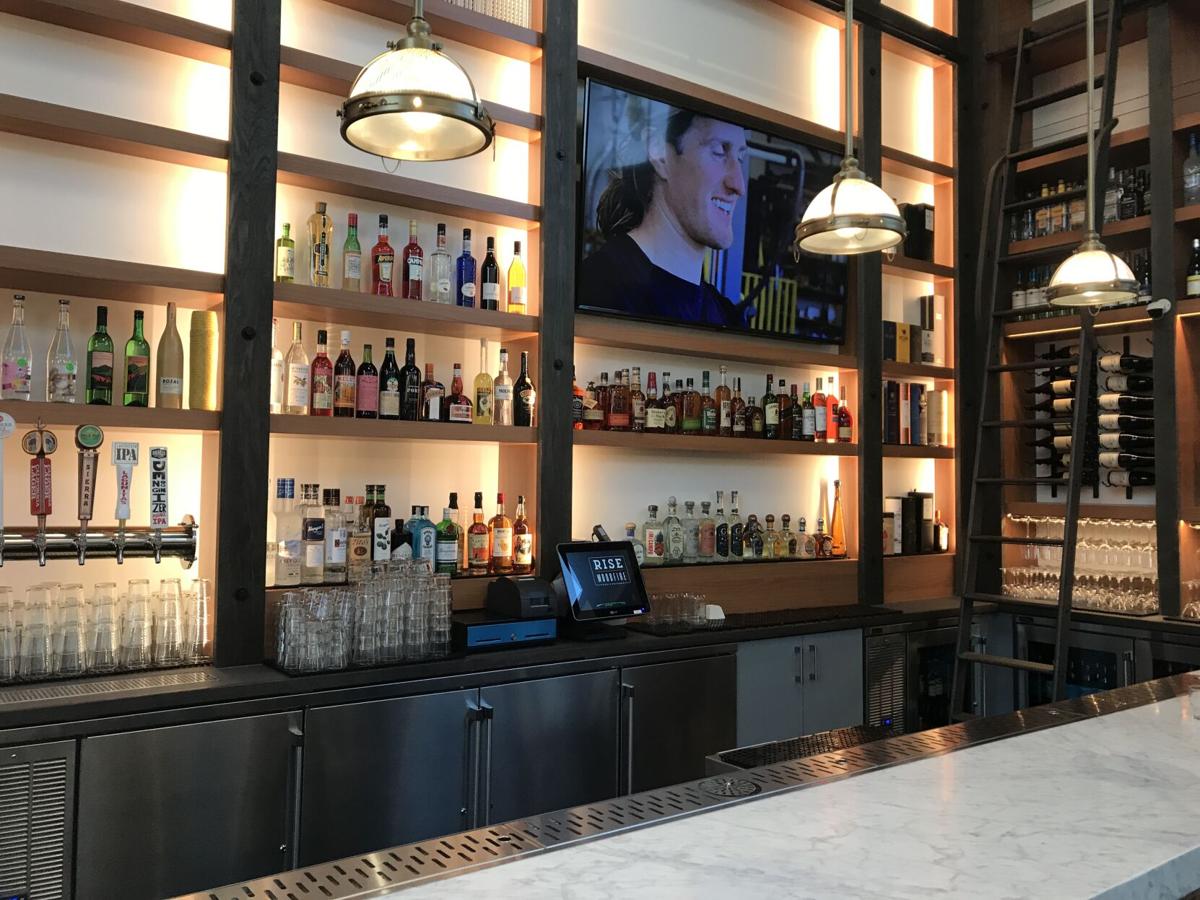 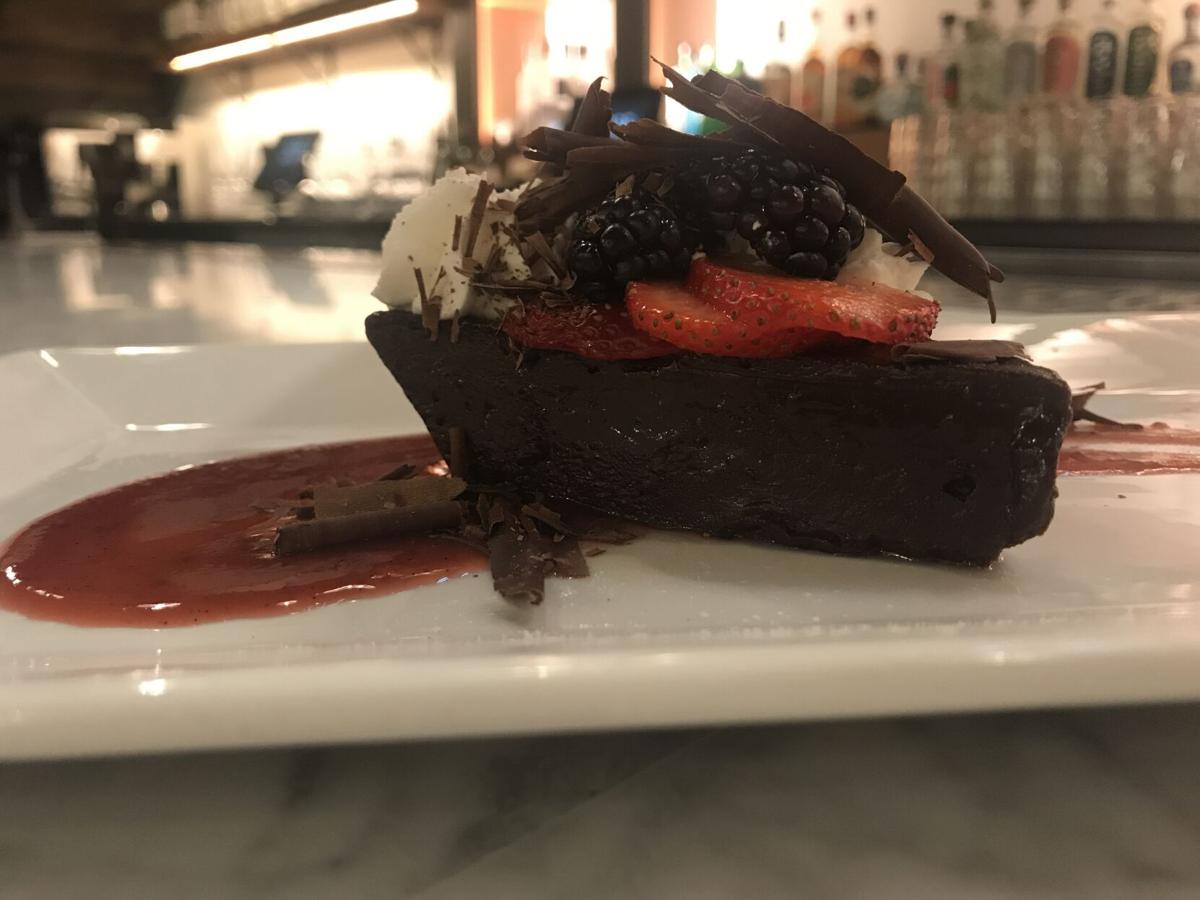 “I think people are going to be just as impressed with the patio as they are with the interior space and what we did with it. I’m really excited about seeing that come to life,” Zahedi said. There’s nothing like it from an operational standpoint for people to be able to come to and have so many different ways to dine with us.”

The upcoming patio area has also become more critical due to the need for outdoor dining during COVID-19. They hope to seat 50 diners in that space throughout the year safely. The full capacity in the main indoor dining area in a post-pandemic time is about 48. Another room in the back can hold 40 people. The patio can hold close to 100.

Their operations right now take place in the main indoor dining room, which includes on one side the tallest bar in San Mateo, according to Zahedi. The large space also has a window view of the Caltrain tracks. The restaurant has an open kitchen, with a centerpiece of two handmade pizzeria ovens that weigh about 13,000 pounds combined. The ovens came from Naples, Italy, and the Mario Acunto family made the ovens. The indoor rooms have a rotisserie grill and architecture designs from architect Jim Maxwell.

“When you sit in here in this beautiful, cathedral-style room, you’re kind of cradled between a beautiful open kitchen with a lot of theater going on there, and then you have the bar on the other side. It’s built to be a very vibrant and energetic space,” Zahedi said.

The menu concept is elevated comfort food, and the goal is to include food everyone grew up with that is still approachable and affordable for all. The restaurant decided to highlight pizza and rotisserie as the anchors for their comfort food, with salad, sides and sauces available to complement the main courses. Sauces available include an Argentinian chimichurri, chipotle barbecue and Peruvian aji amarillo. Desserts include pumpkin cheesecake, a flourless chocolate truffle cake and seasonal pies. The menu has both vegan and gluten-free options, and most food items spend time in the wood fire oven. The San Mateo and Burlingame locations are two different concepts and operations, but there is a crossover between the menus.

“We’re not a pretentious type of operation. We wanted to build a place that brings the community together. That was our initial goal, and that was what we shared with the city, and we want to deliver on that,” Zahedi said.

Rise Woodfire Marketing Manager Erica Chin said their goal is to be a staple in the community and build relationships with their customers and the neighborhood. She believes Rise Woodfire can offer a place for both families and young professionals in the San Mateo area. Chin says many people who come into Rise Woodfire know their Burlingame location and want to try the new menu and location. She expects as more people start using the train station, they will get more commuters.

“We have different types of space to respect other people’s wishes, either they want to be indoor, outdoor or eventually at our outdoor patio. We have a little bit of something for everyone,” Chin said.