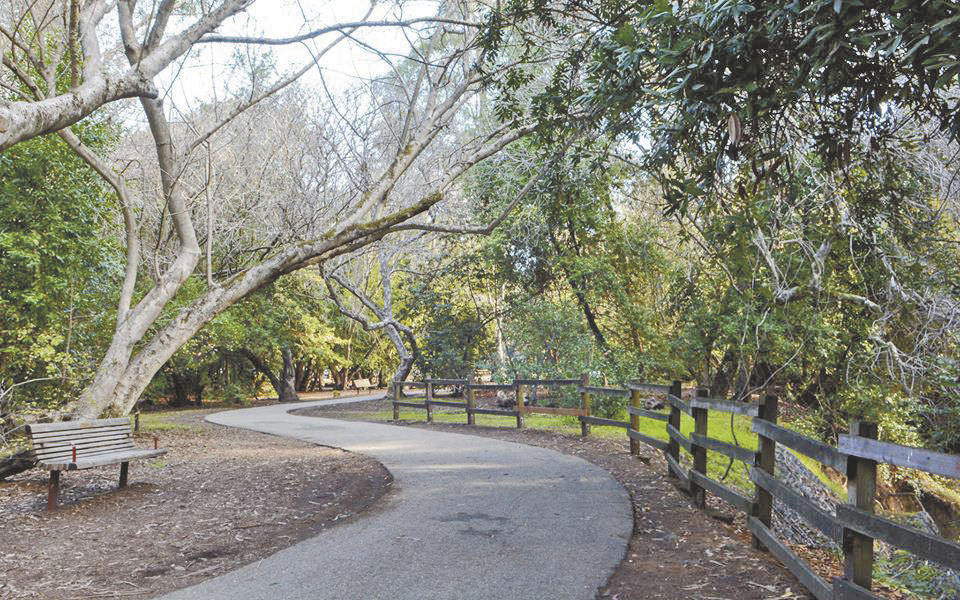 Twin Pines Park in Belmont is a respite of nature, but its past wasn’t always that way.

The Belmont City Council recently approved funding for a master plan to upgrade Twin Pines Park, a bucolic oasis where people can escape the push and pull of modern life by simply listening to the sound of a creek as it flows in the shade of towering trees. It is hard to believe this pastoral setting has a violent history that includes murder, rape and kidnapping.

The unsavory history took place a long time ago when the park was known as the Belmont Picnic Grounds as well as Belmont Park. The present park is a remnant of the original 12-acre, wildly popular venue that opened shortly after the train came to the Peninsula in the 1860s.

Belmont Park was the work of Carl Janke, who wanted to replicate a beer garden from his native Germany. The trains brought party goers from throughout the Bay Area to Belmont where they spent the day meandering through the woods or attending the many picnics hosted by immigrant groups and fraternal organizations, events that drew people by the thousands. Ships also brought park-bound passengers to the Belmont pier.

Today’s 10-acre Twin Pines Park is located on Ralston Avenue a few blocks west of El Camino Real in the same spot once occupied by the Belmont Picnic Grounds, according to the Belmont Historical Society. The society maintains a museum in Twin Pines, which is also home to popular summer concerts as well as picnickers.

Janke’s park featured a dance pavilion large enough to hold 300 dancers, a bandstand and, of course, a beer garden. Eventually, a jail cell was built under the bandstand to hold rowdy patrons, of which there were plenty.

Special trains carried passengers to the park for huge events, such as an 1868 picnic held by the Fenian Brotherhood, a group of Irish nationalists who wanted to free their native land from the English. The picnic drew 10,000 people, but such sizeable gatherings were not unusual for the times. Two years earlier, 15,000 turned out for a Fenian picnic in San Mateo. In 1870, 12,000 Fenians and their supporters converged on Redwood City, overwhelming a city of less than 2,000. The Irish group was not the only organization to hold massive picnics. In 1876, 8,000 people showed up at Belmont for an Odd Fellows picnic.

Belmont picnics often ended in drunken brawls and at least one escalated to gun play when a San Francisco hoodlum was shot to death. Drunks smashed out train windows with such frequency and people along the line complained so often that by 1900 Southern Pacific canceled charter trains to the park. Belmont Park deteriorated rapidly and was subdivided for other uses. In 1972, voters approved buying land for today’s Twin Pines Park, an area that then was the site of the Twin Pines Sanitarium.

According to Roy’s Clouds history of San Mateo County, 4-year-old Annie Mooney vanished from the park in 1883, never to be seen again in what he called “the most celebrated kidnapping case of California.” The most infamous and sensational episode at Belmont Park, however, was the rape of 15-year-old Annie Sullivan on May 10, 1884, allegedly by Henry Casey, described in the San Mateo County Times and Gazette as “a bad character, especially among the female sex.”

Casey had his day in court, but it was a brief one. Annie’s father, Daniel Sullivan, was about 6 feet away from Casey during a court hearing when, without warning, he pulled out a pistol and fired three shots. Casey staggered toward the jury box, straightened up and fell backwards near the front door of the courtroom, mortally wounded. A newspaper reported that Sullivan “felt he did nothing wrong and that he would do the same thing if it happened again.” If letters to the editors are evidence, public sympathy was with the father. Several writers said they would have killed anyone who assaulted their child while others said they would have been driven crazy by such a crime. Sullivan was acquitted on grounds of insanity