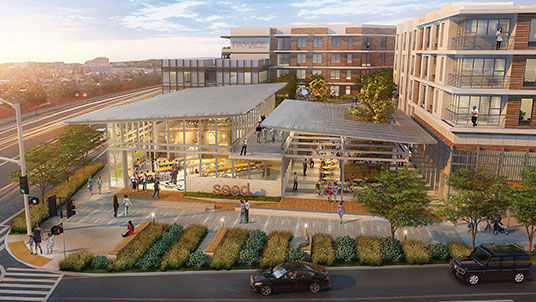 Rendering of the proposed Passage at San Mateo, where initial plans suggest redevelopment of the Concar Shopping Center. 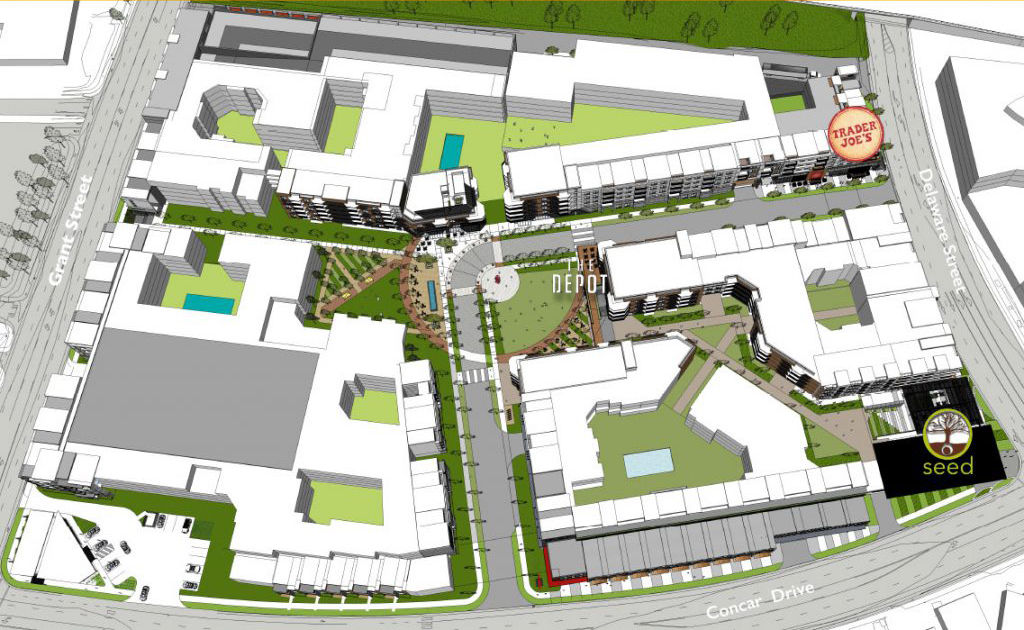 A bird’s-eye view of the proposed site layout shows the 14.5-acre site near the intersection of State Route 92 and Highway 101.

Dozens of residents filled San Mateo City Hall Tuesday to weigh in on a 935-unit development proposed for a 14.5-acre site near the Hayward Park Caltrain station. Residents waved red cards to show they agreed with the speaker. The development would replace the Concar Shopping Center with hundreds of apartments, a dining hall, open park space and a transit hub.

How a 935-unit residential development proposed to replace the Concar Shopping Center in San Mateo will affect the services and stores members of neighboring communities use was among the concerns residents aired at the Planning Commission’s Tuesday study session.

In its first review by the commission, a pre-application for the mixed-use transit-oriented development near the juncture of State Route 92 and Highway 101 elicited a cool reception from many of its neighbors, who expressed concerns about its impact on traffic, infrastructure and the loss or relocation of businesses located at the aging shopping center.

Though the project, dubbed the Passage at San Mateo, is set to retain a Trader Joe’s and 7-Eleven on site and also provide a dining hall, park space and a transit hub open to residents of nearby communities, Sunnybrae resident Barbara Niss found the loss or relocation of well-used amenities like Rite Aid, Trader Joe’s and the nonprofit Peninsula Ballet Theatre to be disheartening.

For Niss, new projects like the 12-acre Station Park Green project — which will add 599 housing units, 2 acres of parks and open space, as well as 25,000 square feet of commercial space and 10,000 square feet of office space across the street from the project — already promise to affect the area. She encouraged the developer to consider how removing the shopping center will change the transportation patterns of its patrons.

“In addition to being so large and fortresslike … this one’s different because it takes away services that we use,” she said. “By taking these services away from us, we’re all going to get in cars.”

Several dancers with the Peninsula Ballet Theatre joined the organization’s ballet mistress Nina Baratova-Amato in advocating for the nonprofit to be included in the development’s plans. Baratova-Amato was disappointed to see the nonprofit, which she noted has been an institution and a cultural hub for more than 50 years, had not yet been included in the plans yet but encouraged the developer to consider it.

“The future of the arts is rocky at best and if we lose this home of ours, we don’t know if we will be able to continue to exist,” she said.

But others expressed hope for the project’s potential to add much-needed housing units to the city’s stock, with several residents encouraging the developer to offer even more of the units at affordable levels. Though 73 units are expected to be made available to those at a very low-income level, Brian Myers, a partner with the developer California Coastal Properties, said the developer may also consider making more units affordable for those at a low-income level.

Esther Conrad, who lives on South Delaware Street, represented the group One San Mateo in noting the region is suffering from a housing affordability crisis. Given the scale of the development and its proximity to the Hayward Park Caltrain station, Conrad noted offering a larger portion of the hundreds of units at lower cost would make it more accessible to those who cannot afford market-rate units.

“Given the size of this development as it’s proposed and the range of issues that the community at large is going to be adjusting to, it seems that it would be really good to include more affordable housing,” she said.

Looming large for many neighbors of the project was how the new use would affect traffic congestion, which many described as worsening in recent years. Noting the some 5,000 jobs within a quarter mile of the project, Myers said one of the goals of the project was to bring housing closer to jobs and that changing the land use on the site from retail to housing is expected to reduce the number of trips in and out of the site, but others doubted a reduction in traffic would be possible with what’s planned. City planner Lily Lim said a traffic study will be completed once a full application has been submitted.

Acknowledging the increased traffic congestion on her commute to Bay Meadows and picking up her children from activities, Sunnybrae resident Robin Gage said she hoped street improvements could be made to allow for bicycle paths and enhanced traffic flow, while also lodging concerns about its overall size and its effect on air quality and water supply.

“I think that this is just not the right project for the area,” she said. “I don’t think anybody here would disagree that something needs to be done, but this just seems way overkill.”

Commissioner Dianne Whitaker said she hoped the project would come back to the commission with significant changes to account for its impact on the surrounding community, adding that she shared many of the same concerns voiced by residents about the project’s density. Because much of the open space is in the center of the two- to five-story buildings, Whitaker wondered if the paths connecting the project with nearby streets would be enough to invite visitors onto the site and encouraged the developer to increase variation of the building heights and stepbacks.

“The current layout of this site … is definitely an inward-facing assemblage of buildings, which I believe does create barriers to the surrounding neighborhoods,” she said. “Because of that I don’t think it says welcome.”

For Vice Chair Charlie Drechsler, the project marked the right direction in increasing the city’s housing inventory. Acknowledging the challenge of worsening traffic congestion, Drechsler said planning carefully for the site is the only way to avoid even further delays. Though he wished the buildings could be taller to allow for more units and so that they could be stepped farther away from the streets, Drechsler acknowledged the many constraints within which the developer worked to craft the plans.

“We want more than this property can provide,” he said. “Let’s invite them to the community and understand that they’re inviting us to their courtyard.”

One of the largest developments proposed in San Mateo in decades, the Passage at San Mateo is set to get even larger after the developer submi…