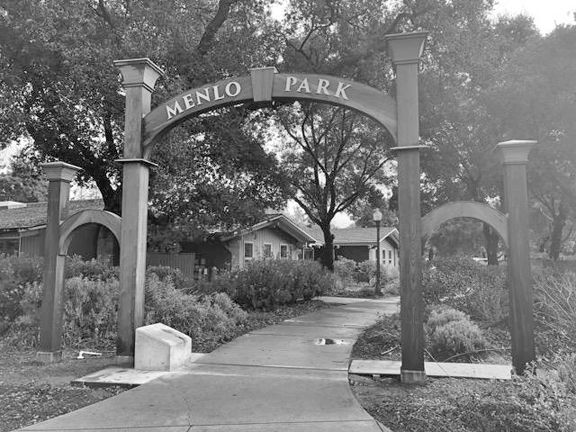 A gate welcoming all to Menlo Park.

Menlo Park, which traces its roots to Ireland, will have a lot to celebrate this St. Patrick’s Day when it dedicates a replica of a welcoming 19th century gate emblazoned with “Menlo Park” across its top, replacing the original that was destroyed in a 1920s car wreck.

Mayor Ray Mueller will be one of the keynote speakers at the 2 p.m. March 17 ribbon cutting ceremony for the gate adjacent to the public library at 800 Alma St. The gate is actually three gates; a large one in the middle, flanked by smaller ones on either side. The middle arch looks big enough to accommodate passage of a carriage, which the original did when it was built in 1854 by two Irish pioneers who hailed from Menlough, a village in County Galway. The Palo Alto Times reported in July 7, 1922, that the first gate was “completely destroyed by two speeding cars filled with singing passengers.”

According to Bo Crane, an historian who specializes in all things Menlo Park, the initial gate, weakened by several winter storms, toppled in 1905. It was righted and became known as “The Portals of Early Days” until it was hit by the cars and collapsed in a splintered heap. As Crane puts it, the gate “became a phantom, existing only in old pictures and some hand-drawn maps” until a few years ago when members of the Menlo Park Historical Association formed a Menlo Gates Committee “to faithfully reconstruct the iconic structure.”

The committee decided to make the gates of redwood, just like the original, but to give the wood surface an aged look to replicate how it might have appeared when first built. Deciding on the location for the new gate was difficult because the original site on El Camino Real is now a storefront sidewalk. Finally, the city offered a space on the library corner of Ravenswood Avenue and Alma Street facing the railroad depot.

According to Crane, Menlo Park’s Irish heritage goes back to the 1850s when Irish immigrants Denis Oliver and Daniel McGlynn acquired 1,700 acres of land thick with oaks along a stagecoach road and built the gate, but the two men let the property revert to the mortgagee and they went their separate ways. Crane, the history association’s secretary, is the author of “The Streets of Menlo Park/Origin of the Street names,’’ a book that reports on what Menlo Park streets are named for. Irish names aplenty include: Donohoe, Doyle, Fitzpatrick, Kelly and Maloney, among others.

Menlo Park isn’t the only Peninsula city that has streets with Irish names. East Palo Alto has several street signs that display the city’s Irish origins. The names include O’Connor, Donohue and Kavanaugh. Each year, the area’s Irish heritage is recalled with a corned beef and cabbage lunch at St. Francis of Assisi Church. Pastor Larry Goode says jokingly that he and fellow priest Father John Coleman are the “two Irish men in East Palo Alto.” Don’t expect Irish singers and dancers at the event on Saturday, March 16. “Irish dancers and singers became costly and hard to get,” Goode said. “For years we’ve tapped into local talent featuring Hispanic and Tongan singers and dancers.”

A few Menlo Park residents have visited Galway, Menlo Park’s sister city, returning with stories about the ties between the two cities and the traces left by Oliver and McGlynn. Among other things, the Menlo Park Hotel in Galway features a restaurant named “Oliver and McGlynn.” The visitors note that Ireland has two towns named Menlough, which means Little Lake in Gaelic. To confuse matters further, there is a Menlo Castle in Ireland. How did Menlough get shortened to Menlo in California? Something may have become lost in translation, but at least one story is simple: The sign painter ran out of space on the first gate and Menlough became Menlo.

There is also the matter of that other Menlo Park, the one in New Jersey that was the home of inventor Thomas Edison. That Menlo Park was named for “a village in the County of San Mateo” in California, according to a 1941 program marking the dedication of a fire station in the New Jersey town.

Sorry, there are no recent results for popular videos.

SLEEP APNEA We can treat it without CPAP!

DENTURES IN A DAY!