A woman holding a protest sign and a boy stand in front of law enforcement wearing tactical gear typically used for crowd control. 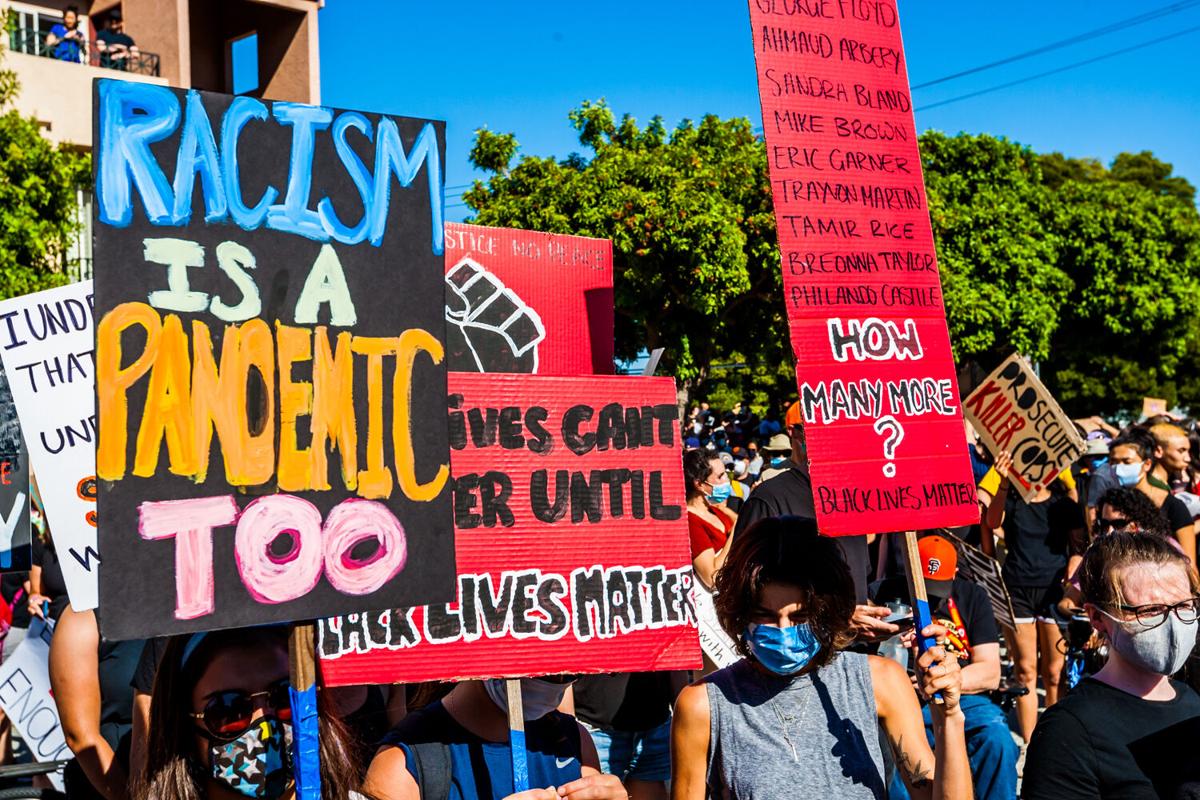 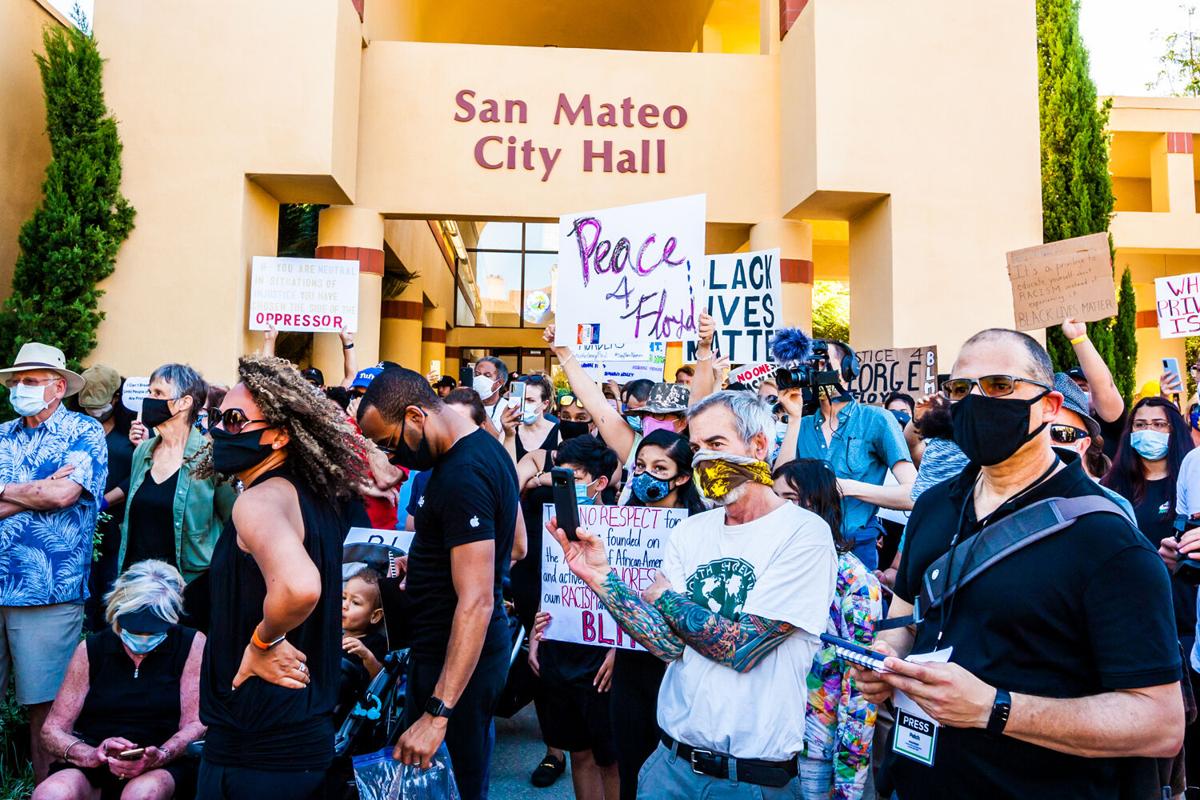 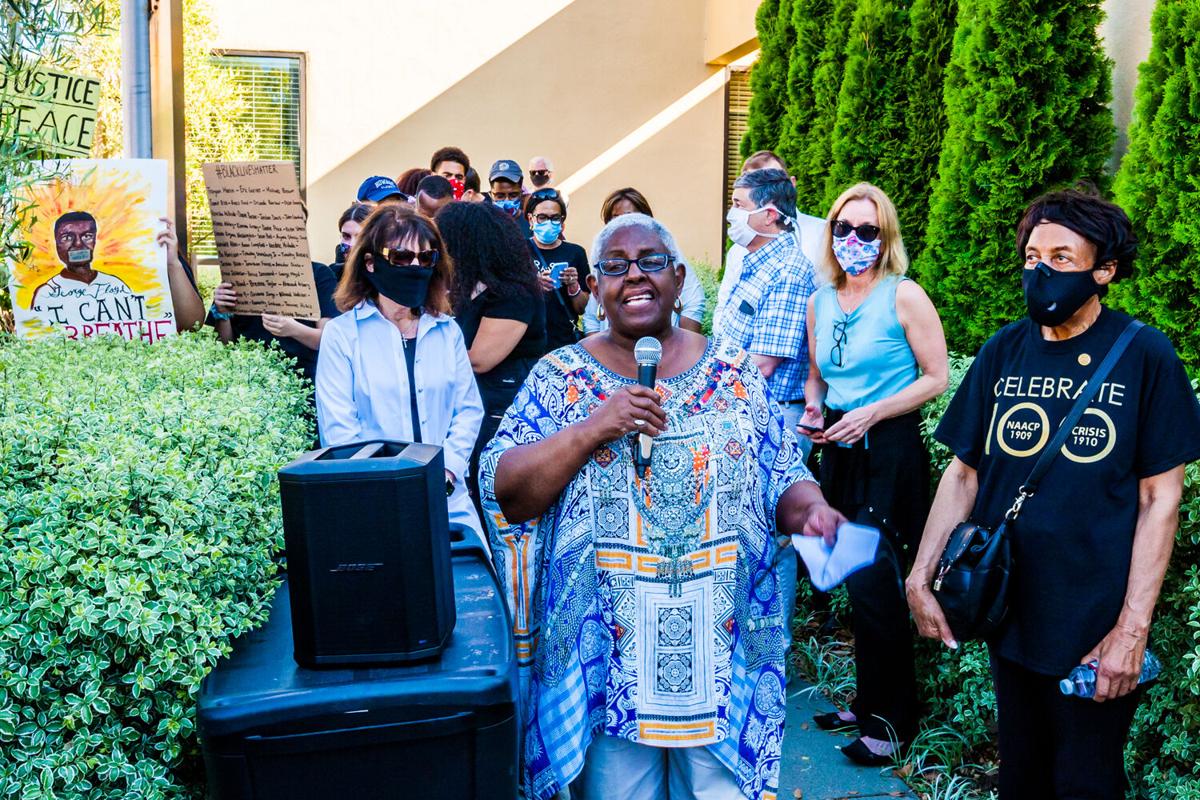 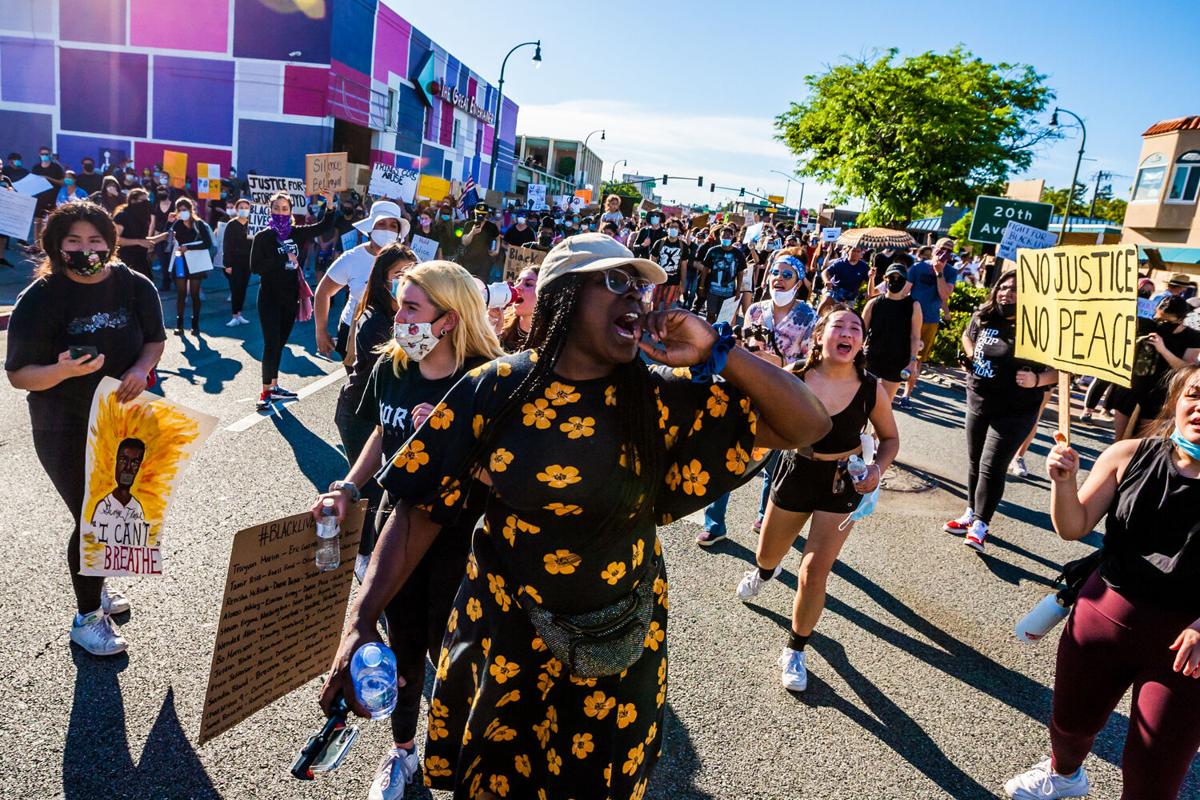 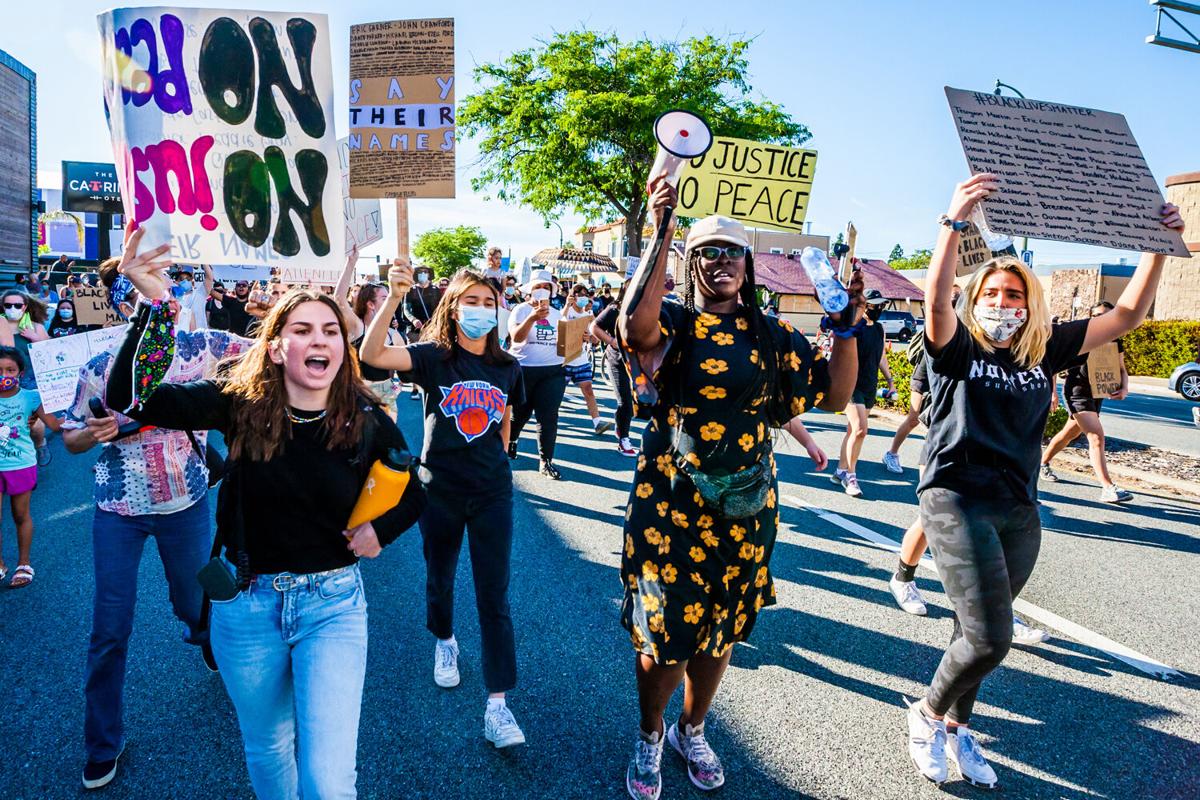 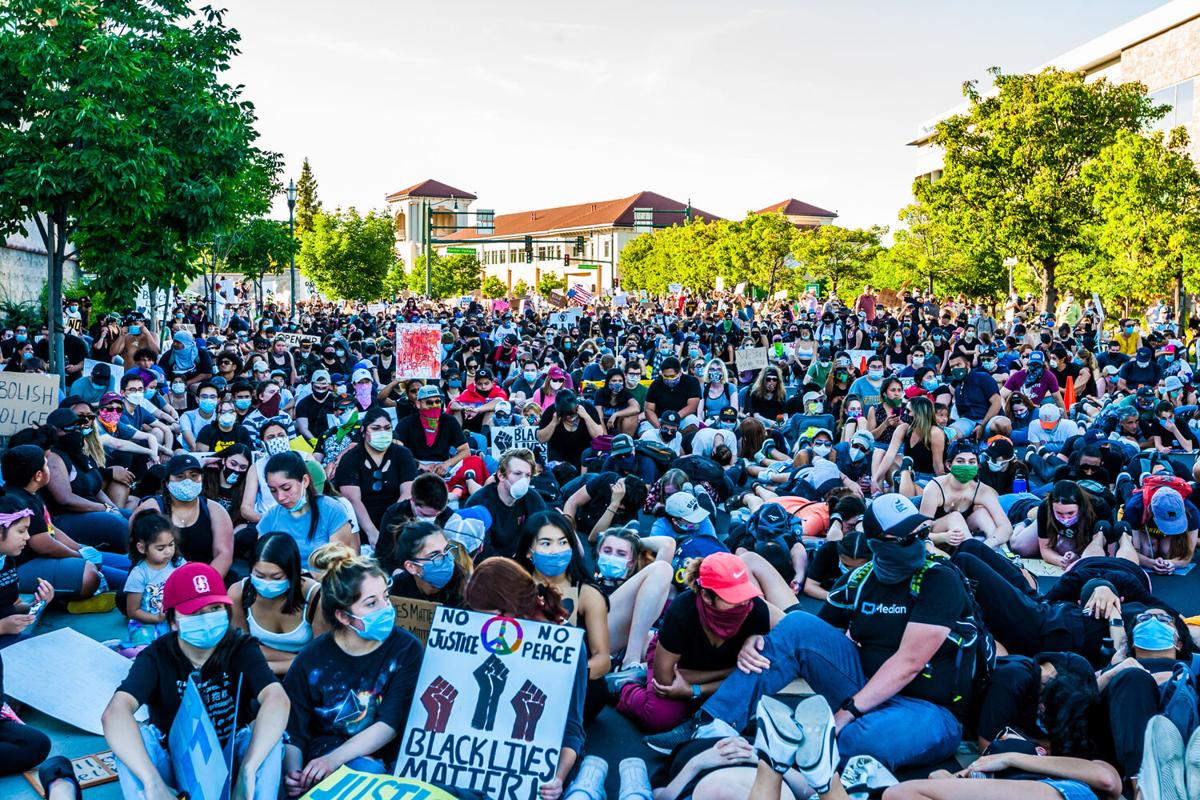 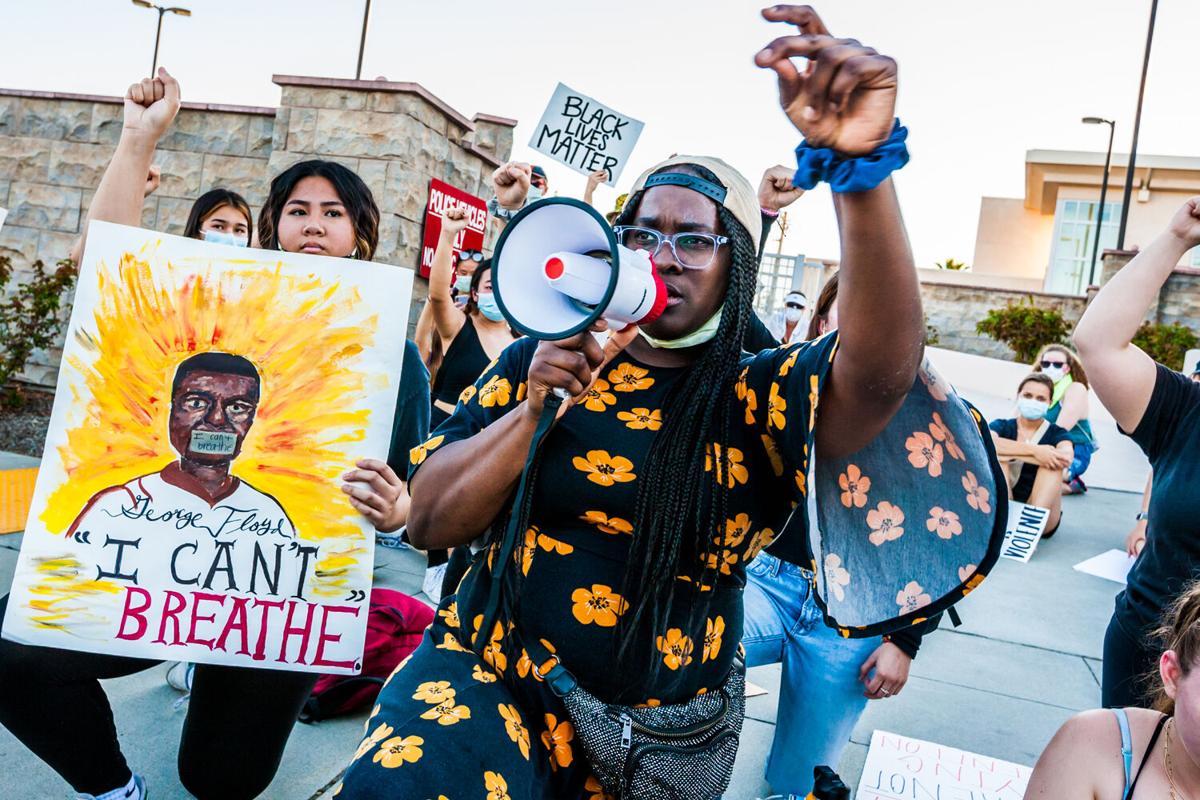 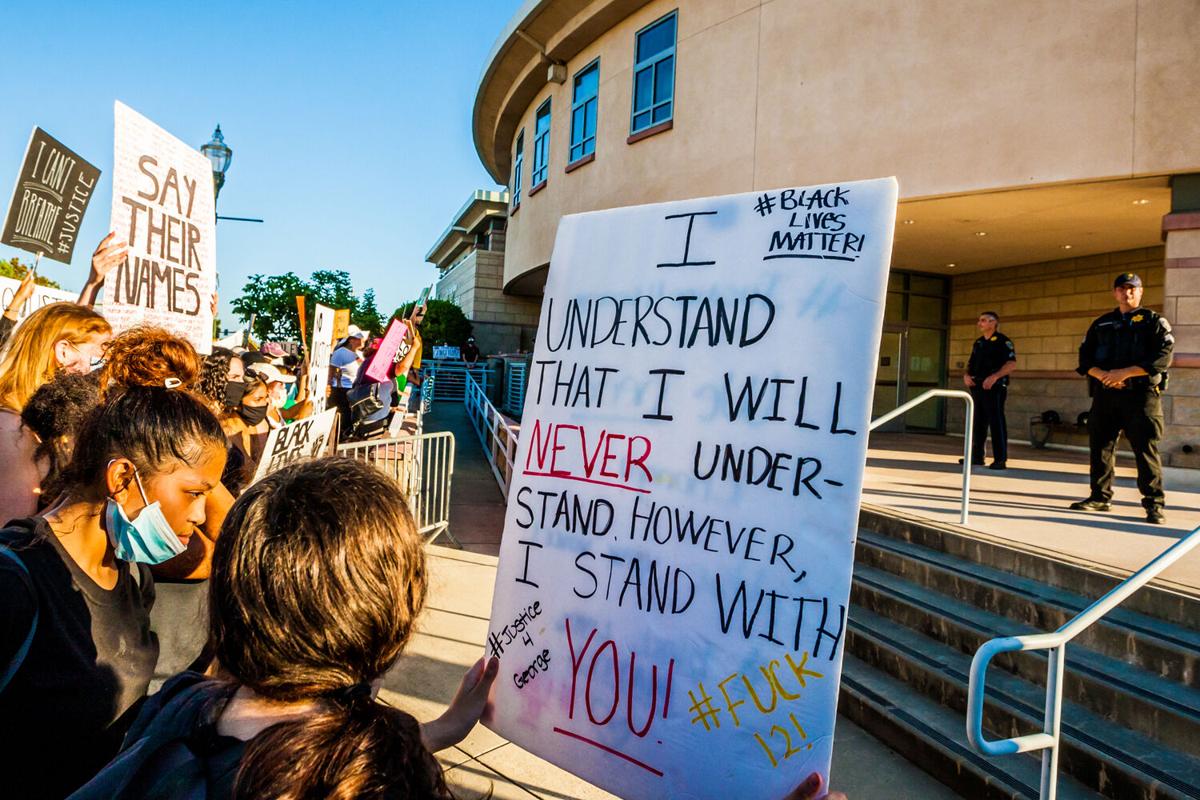 A call for justice

Thousands of protesters traveled down El Camino Real in San Mateo from City Hall en route to the police department.

San Mateo councilmembers and others who participated in a peaceful protest in San Mateo Wednesday sparked by the killing of George Floyd say the police response was at times unnecessarily intimidating and are taking action to prevent such interactions in the future.

Police, however, have described their handling of the protest as “appropriate” and say the equipment they brought, which in part prompted the concern, is consistent with the approach of law enforcement agencies throughout the world.

Attracting roughly 2,000 people, the protest saw zero injuries, detentions or arrests and no property was damaged. It started at City Hall, where a rally was held for speeches from a variety of community members, before a march to the Police Department 1.7 miles away. It was slated to end about 7 p.m., well before a countywide curfew called for two nights at 8:30 p.m. The protest followed numerous ones throughout the Bay Area and nation that were largely peaceful, though many elsewhere were also marred by violence and looting.

What appeared to be an otherwise positive experience in San Mateo turned sour for many after about 200 protesters broke off from the main gathering at the police station on Franklin Parkway and headed for the Hillsdale Shopping Center.

What happened next around 7 p.m. at both locations prompted a backlash from residents and councilmembers alike. According to many, the supplemental group of officers showed up in an unnecessarily intimidating manner, equipped with tactical gear including helmets, batons and zip-tie handcuffs, and some also carried what was widely believed to be tear gas launchers and rubber bullet guns.

“Seeing the police officers wearing the things they wear when things are out of control was not necessary. It was heavy-handed for a situation that was very peaceful and in control,” said Mayor Joe Goethals. “It spoiled the mood for some people.”

Councilman Rick Bonilla also said he was disappointed by the response.

“I was waiting for the moment of silence as we approached 7 p.m. but I never heard a call for it,” he said. “Instead I was disappointed to see a line of police vehicles with lights and sirens driving through the crowd and officers dressed and armed in a way that I felt was inappropriate.”

Shara Watkins, a member of the San Mateo-Foster City School District Board of Trustees, spoke at City Hall and was with her family during the march. She said in a letter to the San Mateo City Council, San Mateo County Board of Supervisors, Sheriff Carlos Bolanos and San Mateo Police Chief Ed Barberini that she witnessed a man jump out of the way of a Sheriff’s Office vehicle and children crying.

“I personally witnessed an older gentleman literally jump out of the way of a sheriff car backing up into the driveway. Children were running into the arms of their parents in tears,” she said. “This was nothing more than an unprovoked, blatant show of force which negated the otherwise positive nature of the demonstration.”

In the statement, San Mateo police noted the supplemental group of officers were outfitted in helmets and other gear because they’re only deployed “when potential unlawful activity presented itself.” San Mateo police spokesman Officer Michael Haobsh said residents before the protest “expressed immense fear about the viral threat of looting that was spread across the internet before Wednesday.” He also noted police discovered local social media posts encouraging looting of retail centers on the Peninsula.

Haobsh said the tools the responding officers were equipped with are common around the world.

“Any tools seen by members of the public are common around the world; San Mateo is no different,” he said. “Thankfully, we didn’t have to use any of our tools during the protest because it was a peaceful demonstration. However, having these tools were part of our contingency plan in the event looting vandalism, or civil unrest took place. Something all to common in the Bay Area these days.

“Our response was appropriate,” he concluded.

The incident has prompted some protesters, including Sarah Fields, president of Peninsula Young Democrats, to call for a change in police policy.

“We urge our cities and county to review these practices immediately and share with the public how you will change and do better,” she wrote in a letter to Barberini and Bolanos with a copy to the San Mateo City Council and San Mateo County Board of Supervisors.

Bonilla said the situation could have been handled differently and met with the city manager about it and will meet with the police chief Monday. He also endorsed policy changes moving forward.

“I believe that there are additional policies that we can put in place to help ensure the safety and well-being of all (including our police) when interfacing with the police,” he said.

Goethals apologized to the protesters and said he will take steps to ensure the behavior that caused concern won’t happen again.

“I own it and I apologize for it and will take steps to ensure in the future we’re not exposing peaceful protesters to that kind of show of force,” he said.

Despite the criticism, Goethals and Bonilla both expressed high praise for the police department generally and for its handling of the protest before 7 p.m.

“I have a great deal of confidence in the San Mateo Police Department and their abilities to keep the people of San Mateo safe,” Bonilla said.

A call for justice in San Mateo