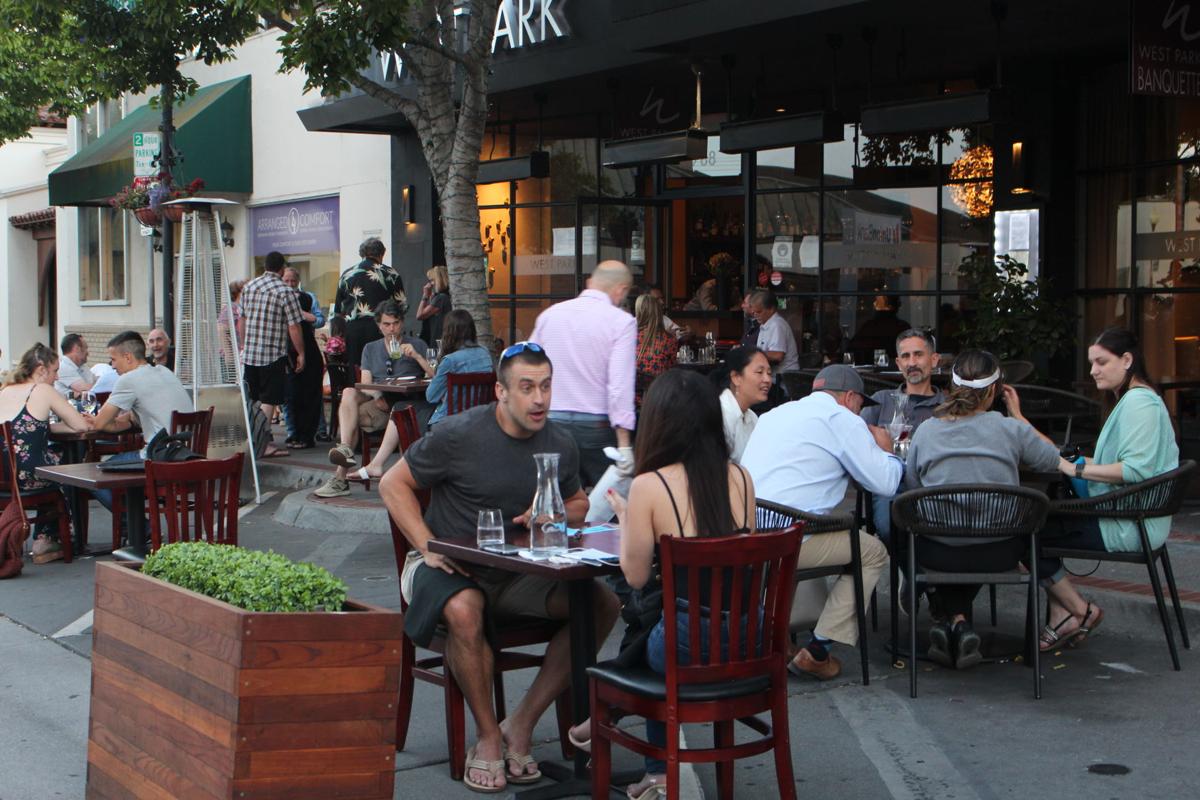 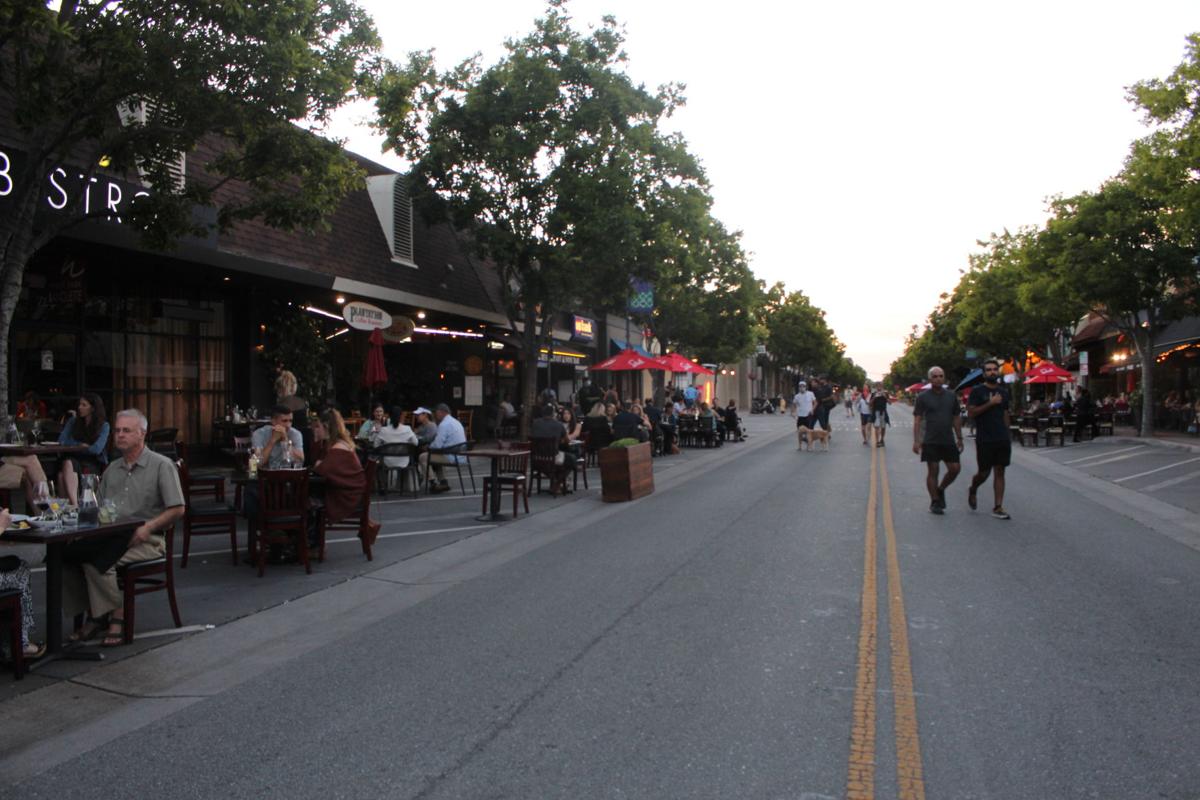 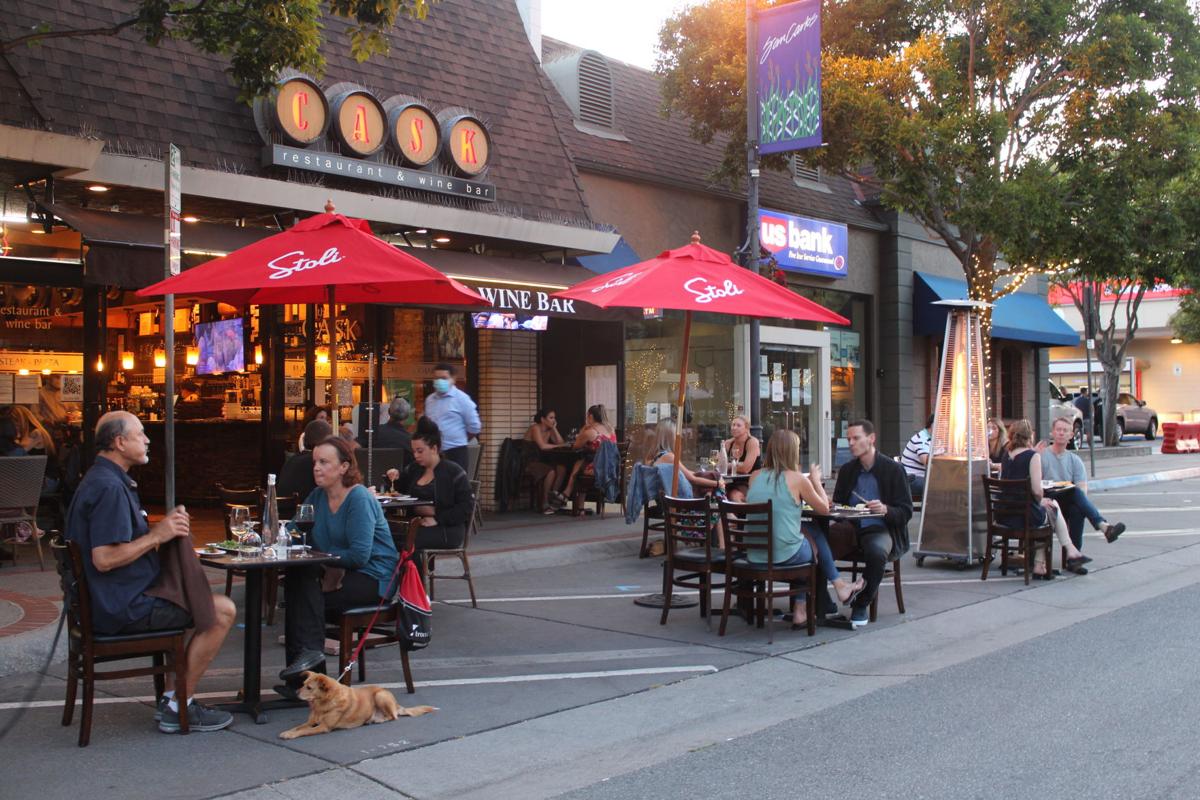 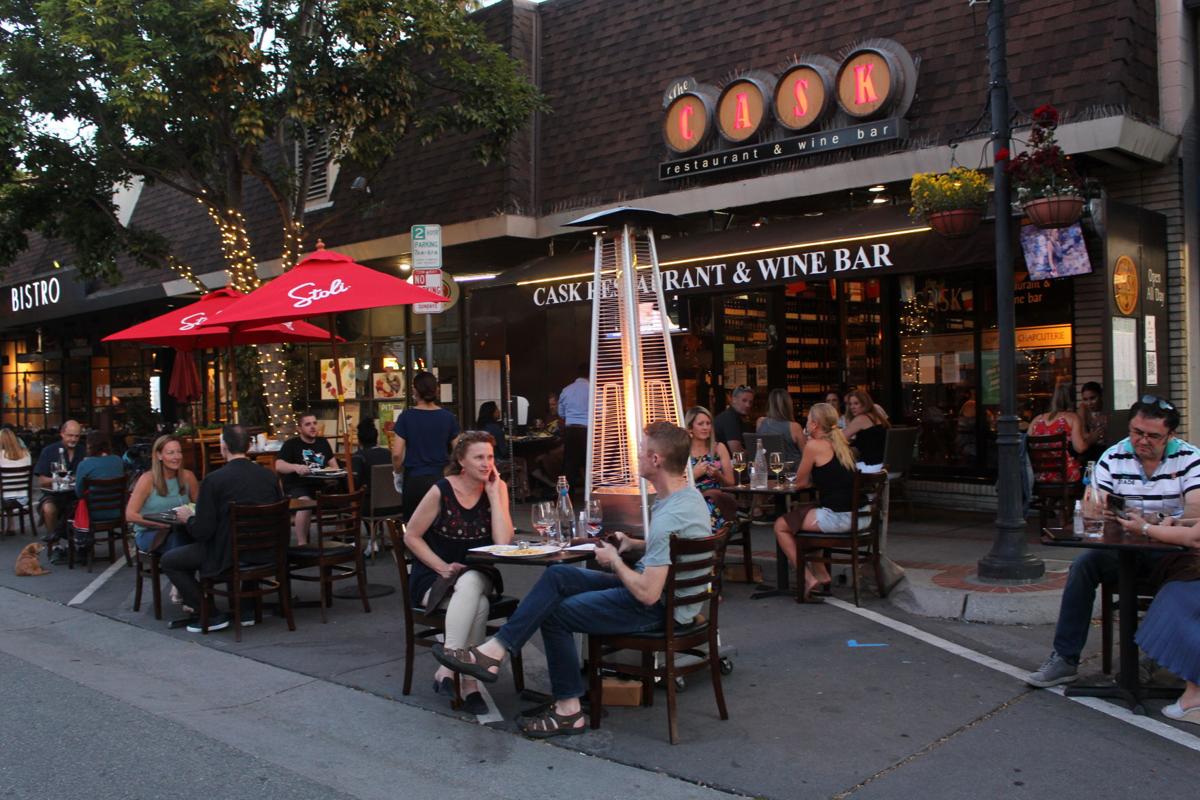 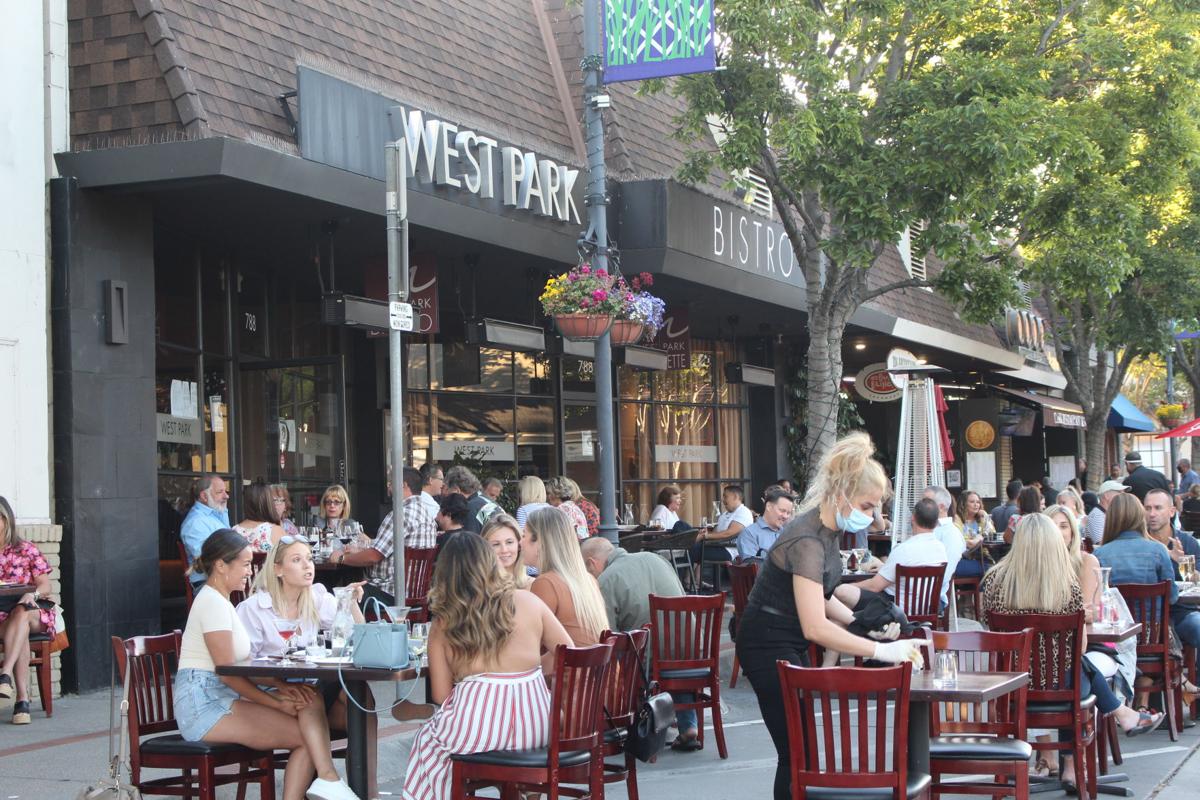 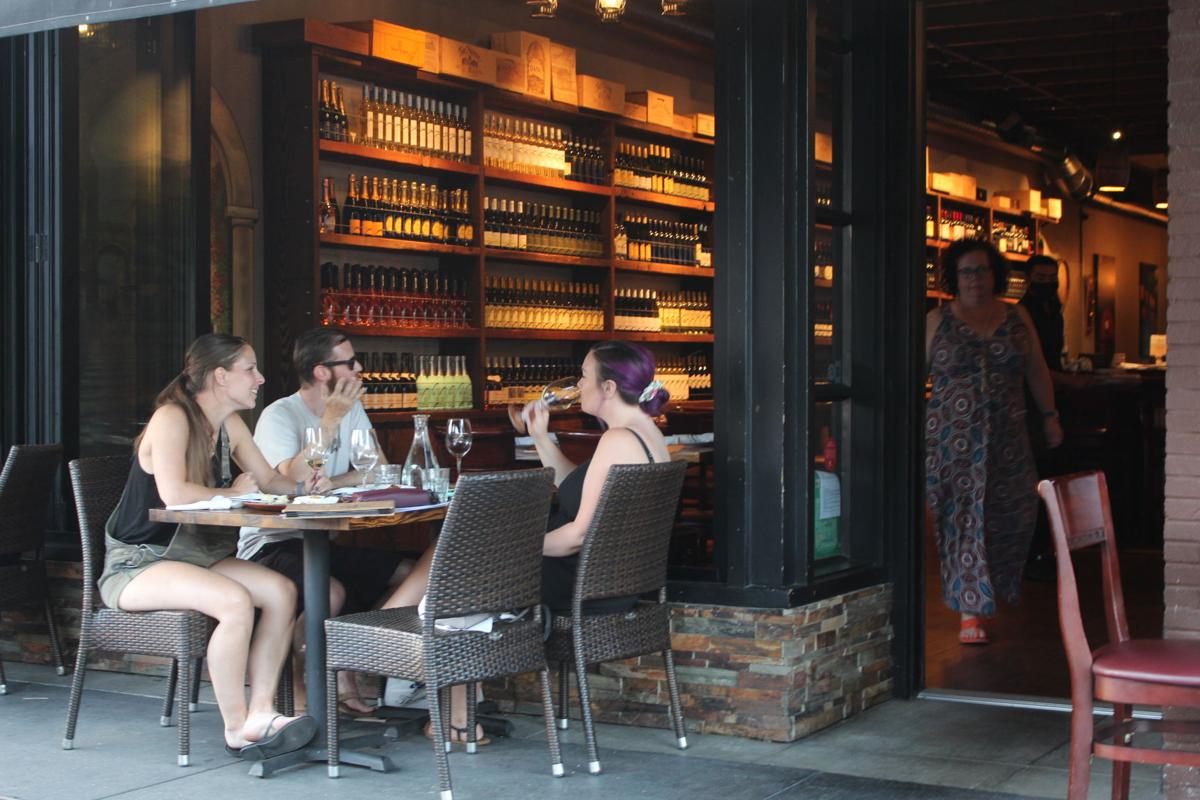 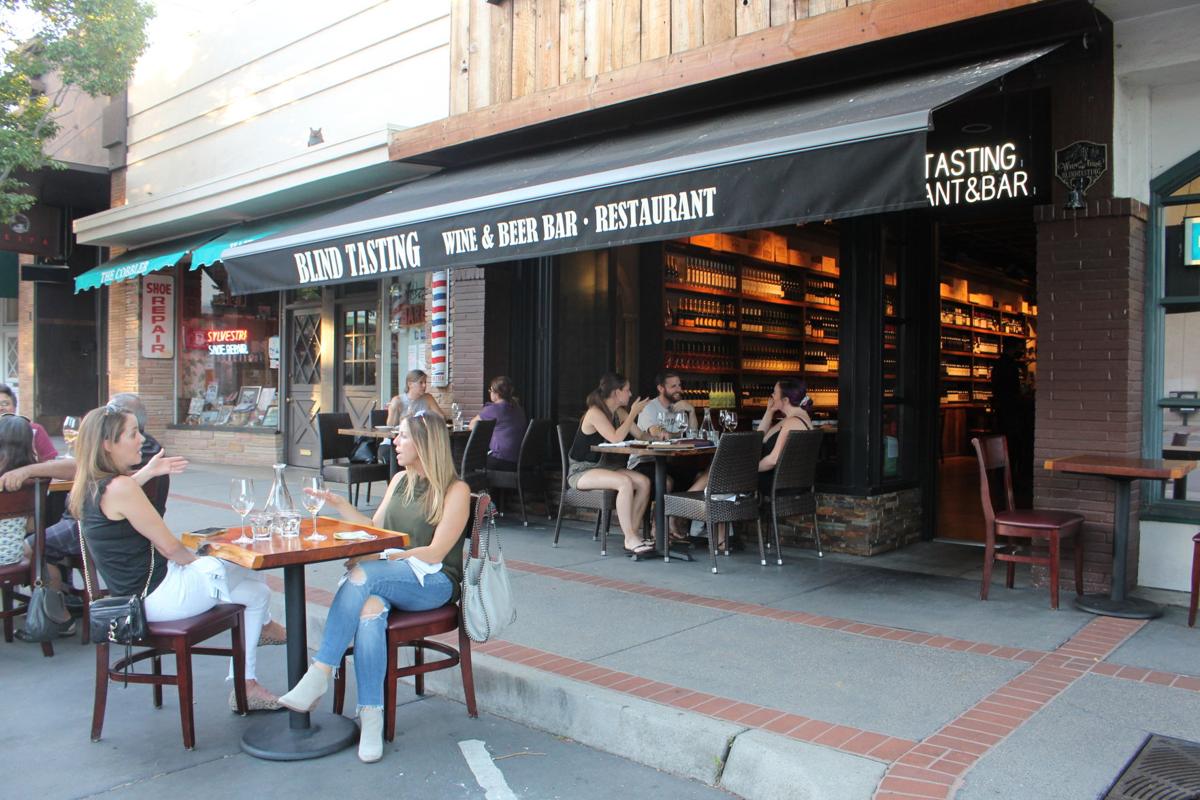 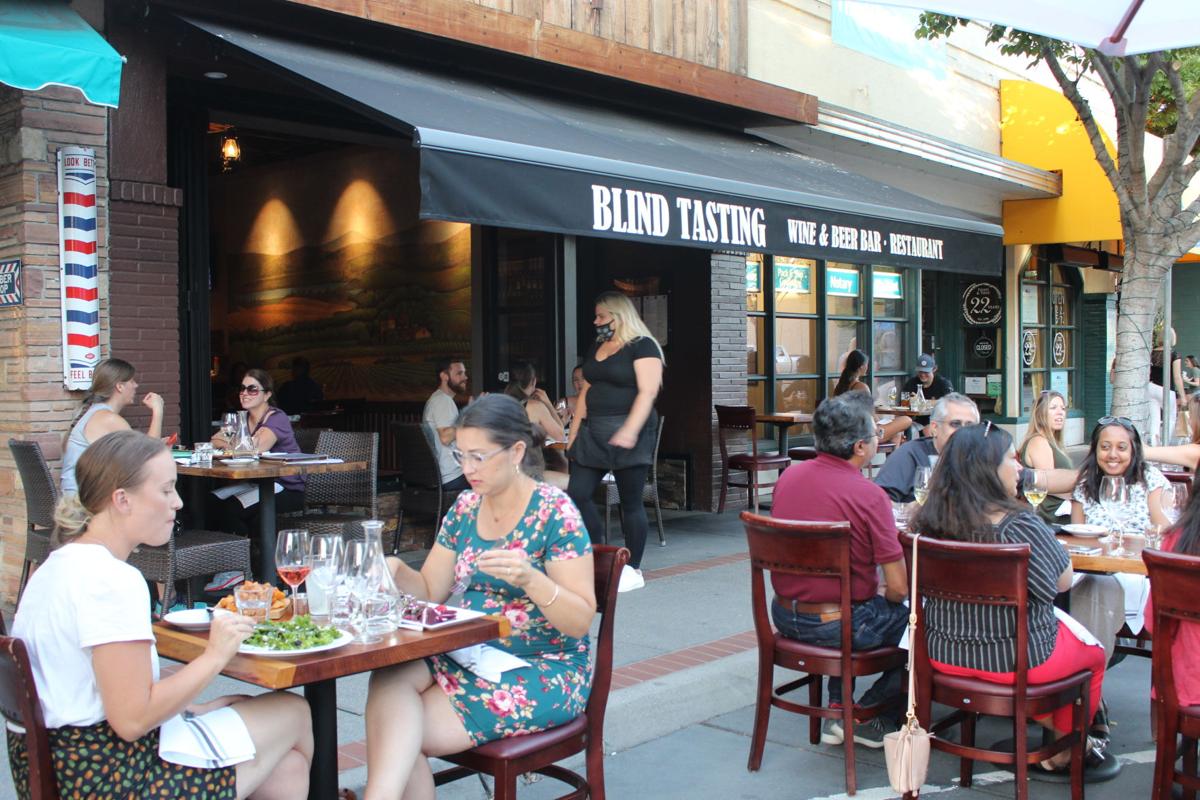 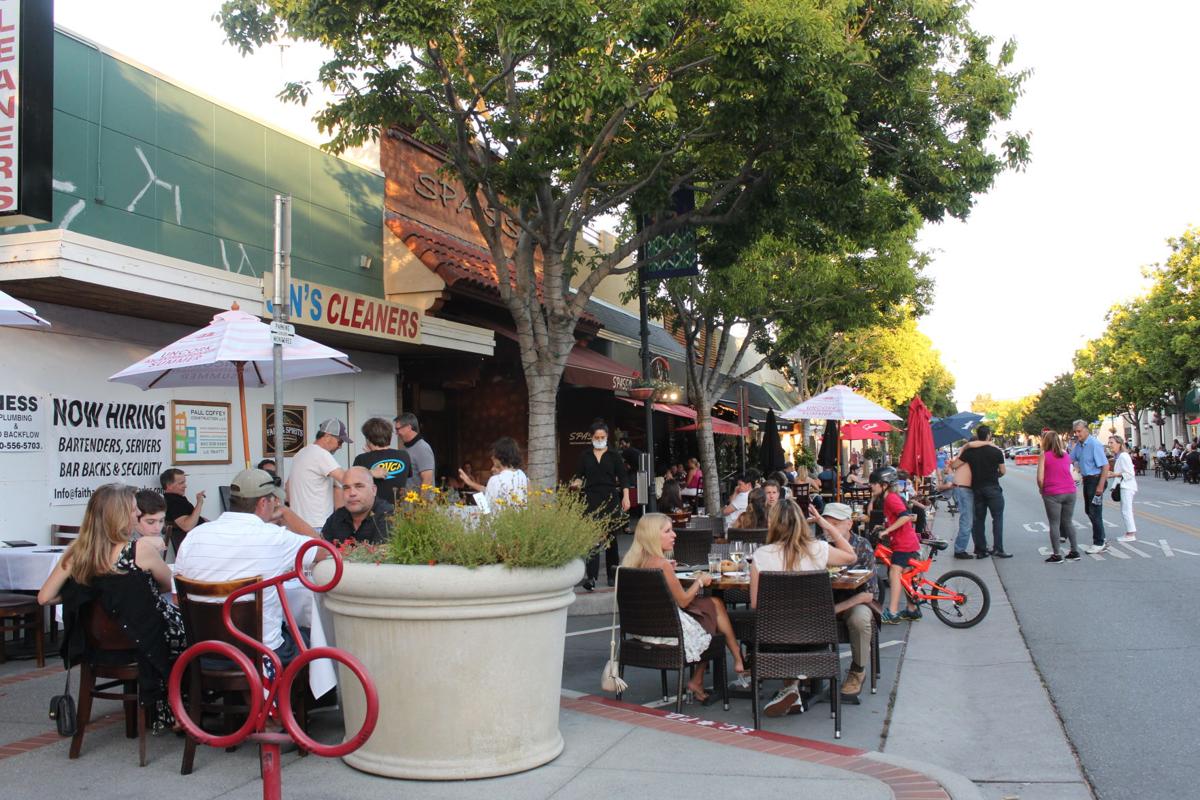 Diners gather for an outdoor meal during the Laurel Street closure program.

A street closure pilot program intended to assist business operations on Laurel Street and San Carlos Avenue has been met with a mix of praise and criticisms San Carlos officials are working to remedy.

“We’re getting mostly positive reviews but we do have some issues to work out. People are worried about losing business,” said San Carlos Mayor Ron Collins.

Cities countywide are implementing or in the planning stages of permitting outdoor dining in public streets in an effort to encourage patronage to businesses and safe outings by residents. In San Carlos, the first city in the county to block off vehicles for dining purposes, staff opted to completely close off the 600 and 700 blocks of Laurel Street to vehicles beginning Saturday, June 13.

On the 800 and 900 blocks of Laurel Street and 1100 block of San Carlos Avenue, water barricades were placed between parking stalls and oncoming traffic to provide safety measures for diners. The barriers and closures have become a point of contention between restaurant owners interested in using the space for seating and other businesses wanting the space freed for customers to conveniently access storefronts.

Burak Muratoglu, the owner of restaurants Spasso and Blind Tasting on Laurel Street, said the program was a welcomed move by the city but he would like the plan expanded to provide permanent parklets to merchants who would like them.

“We were really happy to see [the program]. So far so good, but you never know. It helps,” said Muratoglu.

With the street closed and the new county health order permitting indoor dining, nine tables have been placed outside Blind Tasting with an additional five to six tables inside. A greater number of outdoor tables are available at Spasso after a neighboring business allowed the eatery to expand into unused stalls. Despite the expansions, Muratoglu remains concerned of what will happen during winter months when wind and rain push customers inside where health concerns may lead to continued capacity decreases.

“I’m happy, I’m thankful and it does help. But it doesn’t get the stress out of our heads of what will come,” said Muratoglu.

Lynne Board, a co-owner of the women’s clothing boutique JoeyRae on Laurel Street, said her customers have been displeased with the program due to the lack of access to the storefront.

“I’m completely confused why the city did this without considering the retail stores. It’s not feasible, probable or anything for us to haul our merchandise outside and haul it back inside,” she said. “Our candles would melt, clothing would fade. ... It’s dirty.”

JoeyRae, on the 600 block of Laurel Street, is open by appointment only and customers can schedule a time to shop the store alone or with friends, allowing for time to clean in between visits. Board said her loyal customers have kept her afloat but if the street closure continues into the holiday season she could lose her business by the end of the year.

“They proposed the program go until Dec. 31 and if it does it’ll kill the holiday season. It could possibly shut me down. It’s that big. November and December are far better months for us. Retail is very seasonal,” she said.

Board said she has yet to see any effect the street closure has had on curbside pickup which has boosted the store’s revenue but she’s concerned it may deter customers from taking advantage of the service. She said she and her staff have yet to notice additional foot traffic past her storefront despite diners visiting nearby restaurants, adding no one has signed up in person for an appointment.

“It’s an inconvenience getting to the shop and [the street closure] prevents them from coming. It should be parklets, not an entire street closure,” said Board.

At the Refuge, an East Coast-style eatery on the 900 block of Laurel Street, the process of completing the permit applications was time consuming, but owner Melanie Roth was determined to complete the process thoroughly.

“Every restaurant needs to do what’s best for them. For us, we need to do what we can to cover ourselves for liability purposes. We want to do things right and protect ourselves from liabilities,” she said.

Applications for the encroachment permit necessary for merchants to open in the street were made available Thursday, June 11. Staff said processing applications could take a week or two to complete though many merchants opened just days after the application became available. Mayor Collins said the city is working with restaurants to ensure proper paperwork is completed.

Despite the permit process, Roth said she was thankful the city included her restaurant in the program after she requested they do so at a previous City Council meeting.

“We were so happy when the city decided to do that for us. ... We’re looking forward to seeing how it will benefit in a positive way,” she said.

The Refuge opened for outdoor dining for the first time this Thursday to a strong turnout of customers and multiple calls for reservations, said staff. Roth said the eatery is taking a wait-and-see approach to the business model before considering “pivoting” to another style of service such as indoor dining. Similarly, the city is also taking the same approach to adjustments of the program.

“We’re just about a week into this and trying to make some adjustments where we can. We’re listening to merchants and the public and want to take a little time to see how this is working. We don’t want to have a knee-jerk reaction,” said Councilman Adam Rak, who is also on the Safe Streets Ad Hoc Committee tasked with overseeing the program.

Councilmembers will receive an update on the program during Monday’s City Council meeting and will have the opportunity to agendize an item for a future meeting to discuss changes such as modifying the program hours, shortening the timeframe or terminating the program altogether.

In other business, the council will consider agendizing an item for a future meeting to discuss the creation of a sister city relationship with a U.S. city with a large Black community. The council may also agendize a discussion on refunding the appeal fee to Terence Wang, the appellant of the 626 Walnut St. development plan.

A study session will be held on law enforcement policies and the #8CantWait initiative, an emerging set of police force policy changes. The council will also consider approving a $9,270,076 agreement with the county Sheriff’s Office for police services starting July 1, 2020, through fiscal year 2021.

Also up for consideration is a measure proposed by Vice Mayor Laura Parmer-Lohan calling for a temporary 10% reduction of councilmember stipends. The council will also consider adopting a memorandum of understanding between the city and the American Federation of State, County and Municipal Employees in which no pay increase will occur for city employees and vacation hours will be capped at two years.