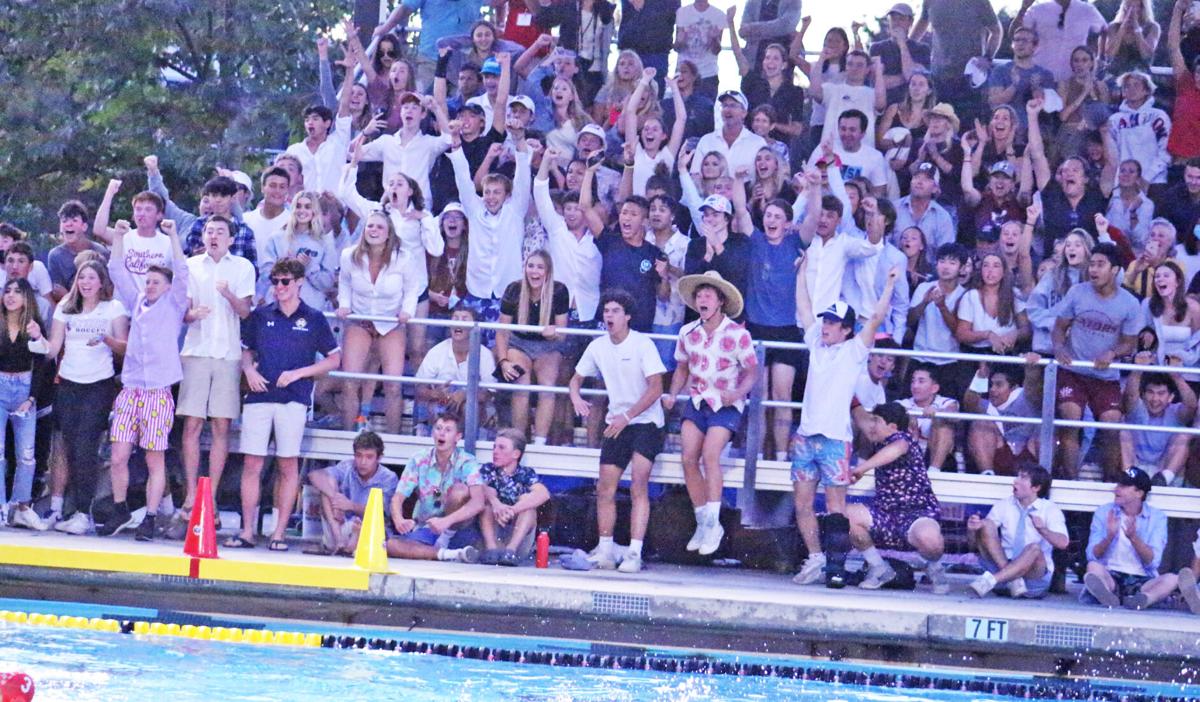 Sacred Heart Prep fans celebrate after the final buzzer in the North-South title game Saturday at the Dunlevie Aquatics Center. 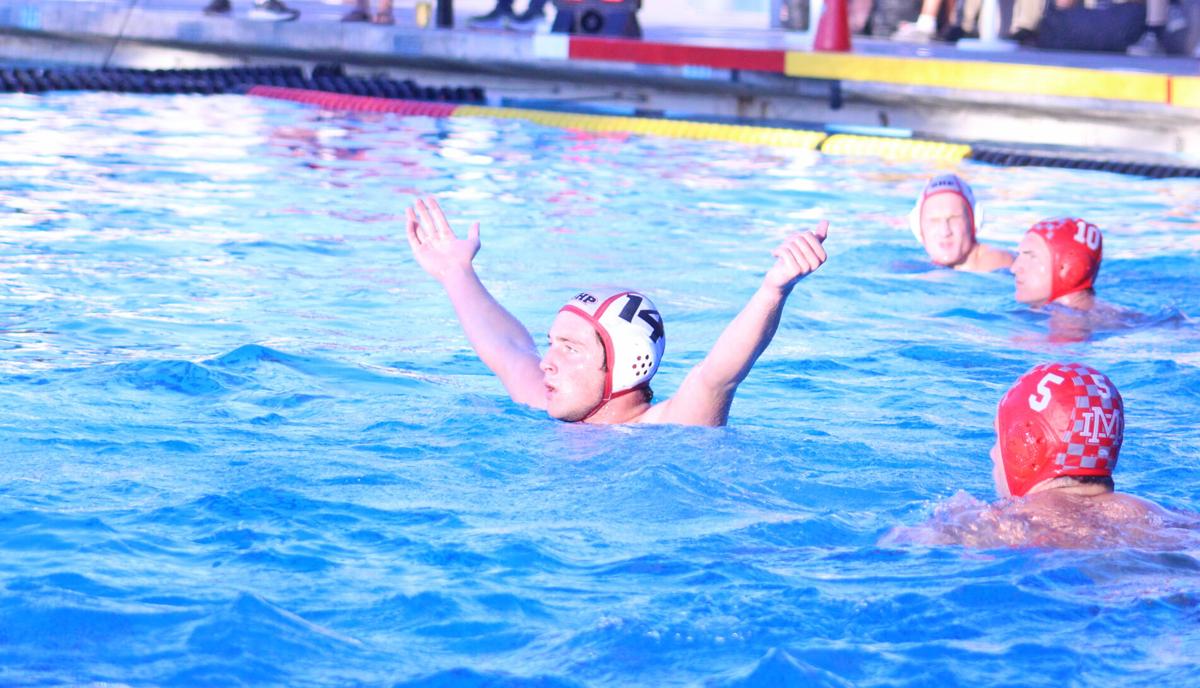 Jake Tsotadze celebrates after his goal in the first quarter against Mater Dei. The junior scored two goals on the day, including the eventual game-winner.

Sacred Heart Prep junior Jake Tsotadze takes aim the first of his two goals in the North vs. South Challenge boys’ water polo tournament championship game Saturday at the Dunlevie Aquatics Center. Tsotadze went on to score the game-winner in a 6-5 victory over Mater Dei.

Championship Saturday of the North vs. South Challenge was a day of destiny for Sacred Heart Prep.

The Gators have had the date circled on their calendars since Sept. 18, the day they suffered their only loss of the season to Southern California powerhouse Mater Dei. And red-hot SHP reveled in the big day, storming through its home tourney to earn its rematch with the No. 1 team in the nation, according to MaxPreps.com.

And in dramatic fashion, led by junior Jake Tsotadze’s go-ahead goal with 3:31 to play, and some late heroics from goalkeeper Griff Price, SHP knocked off mighty Mater Dei 6-5 in the championship game to claim the North-South title for the first time in three years.

“That’s why we play,” Price said. “In those moments we’ve got the momentum and it’s just all about staying calm and composed, playing our game. … That’s why we go through all this hard work, for these moments. We’re super stoked.”

The Gators earned their shot at the championship by virtue of two wins Friday — 16-4 over Santa Margarita and 16-10 over Loyola — before Saturday’s early game, another thriller, an 8-7 victory over Harvard-Westlake in the semifinals.

While SHP is finally playing at full strength after Tsotadze rejoined the team Oct. 2 after spending three months out of the pool due to a back injury, head coach Brian Kreutzkamp described his team’s championship finish in one honest word — exhausted.

“The truth is these guys are exhausted,” Kreutzkamp said. “Having to play Harvard-Westlake this morning, a one-goal game the entire time, and then turn around on limited rest and play the No. 1 team in the country, we were just holding on by a thread. So, it was one of the gutsier efforts I’ve ever seen by my team.”

Tsotadze personified that gutsy effort. While junior Will Swart led the Gators with three goals in the match, each of Tsotadze’s two goals gave his team the lead. His first came with 1:04 remaining to swing SHP out front 2-1. Then after a 5-2 lead dwindled in the fourth quarter on a game-tying goal by Mater Dei senior Ryan McManigal’s fourth goal of the game, Tsotadze responded with the game-winner in the waning minutes.

“I’ve got to give it to them, they have really good players and a really good coaching staff,” Tsotadze said. “But we came out here and we obviously wanted it more. We were super motivated. It’s been our goal to be as dominant in any sort of game that we can, and we came out here and really proved that Sacred Heart is one of the top teams in the country.”

The stage for Tsotadze’s game-winner seemed to lend an air of destiny to the occasion. With a picturesque sun glitter cascading across the length of the pool at the Dunlevie Aquatics Center, the junior emerged off the left wing of the east goal where the reflection glistened brightest to deliver the momentous score.

As he turned to face the legion of SHP students morphing the pool party of the year into a moment of pandemonium, Tsotadze’s face lit up with the sheen of the setting sun dancing atop the water, seemingly just for him, and waved his arms in both celebration and catharsis.

“My teammates set me up,” Tsotadze said. “I’ve got to give it to them, I have an amazing team beside me. My only job is just to put the ball in the back of the net and work with my teammates, and they definitely set me up to be in a position to score that goal.”

It was an opportunity that was almost lost. The 6-on-5 score came on the heels of a Gators timeout to set a play following the Mater Dei exclusion. But just prior to SHP working the ball around to Tsotadze, a tipped pass flew into the corner, leading to a mad scramble. SHP senior Bear Weigle was first to the ball, though, chasing it down quickly and allowing SHP to set up its perimeter with 15 seconds remaining on the shot clock.

“That’s the last thing I’m trying to preach to these guys,” Kreutzkamp said. “I was like: ‘Look, down the stretch just hustle. Just outwork them.’ And it was a hustle play, into a great shot, but we’re not there if [Weigle] doesn’t get that rebound.”

With the Gators up 6-5, the final three minutes were ruled by Price.

Mater Dei senior Vince Merk missed off the wing with 49 seconds to go. But Mater Dei stole the ball back with 24 seconds to play to set up one last look. The Monarchs earned two attempts on their final possession, including a save by Price, followed by a shot that sailed wide with seven seconds to go to all but seal the SHP win.

“If you have a good goalie, you’re in every game,” Kreutzkamp said. “That’s the rules. All we knew was, coming down the stretch, Griff was playing amazing, standing on his head, blocking everything, and it just gave us so much confidence.”

One of the top high school goalkeepers in the nation, Price also had a hand in the Gators advancing to the championship game with an unlikely goal in the semifinals.

With SHP leading Harvard-Westlake 7-6, the senior produced one of his 12 saves in the semifinal and observed his opposite number moving out of the cage to help defend the Gators’ counterattack. It was an opportunity Price had been watching for the entire game and had even strategized about with Kreutzkamp.

Only, Kreutzkamp had instructed Price to try for a cross-court shot early on, not in the closing minutes. But when Price saw an opening with 3:28 remaining in regulation, and SHP clinging to a one-goal lead, he took it.

“He waited till the wrong moment, and it was such a great shot,” Kreutzkamp said.

Saturday marked the second straight tournament championship for the Gators, who captured the Elite 12 Tournament title Oct. 9 at Harvard-Westlake. Both titles have come since Tsotadze’s return.

The Gators last won the North vs. South Challenge in 2018.

“This was our last huge tournament and I’m super excited to end it on such a high note,” Price said. “We won this tournament when I was actually a freshman, so it’s good to bring some closure from freshman to senior year.”