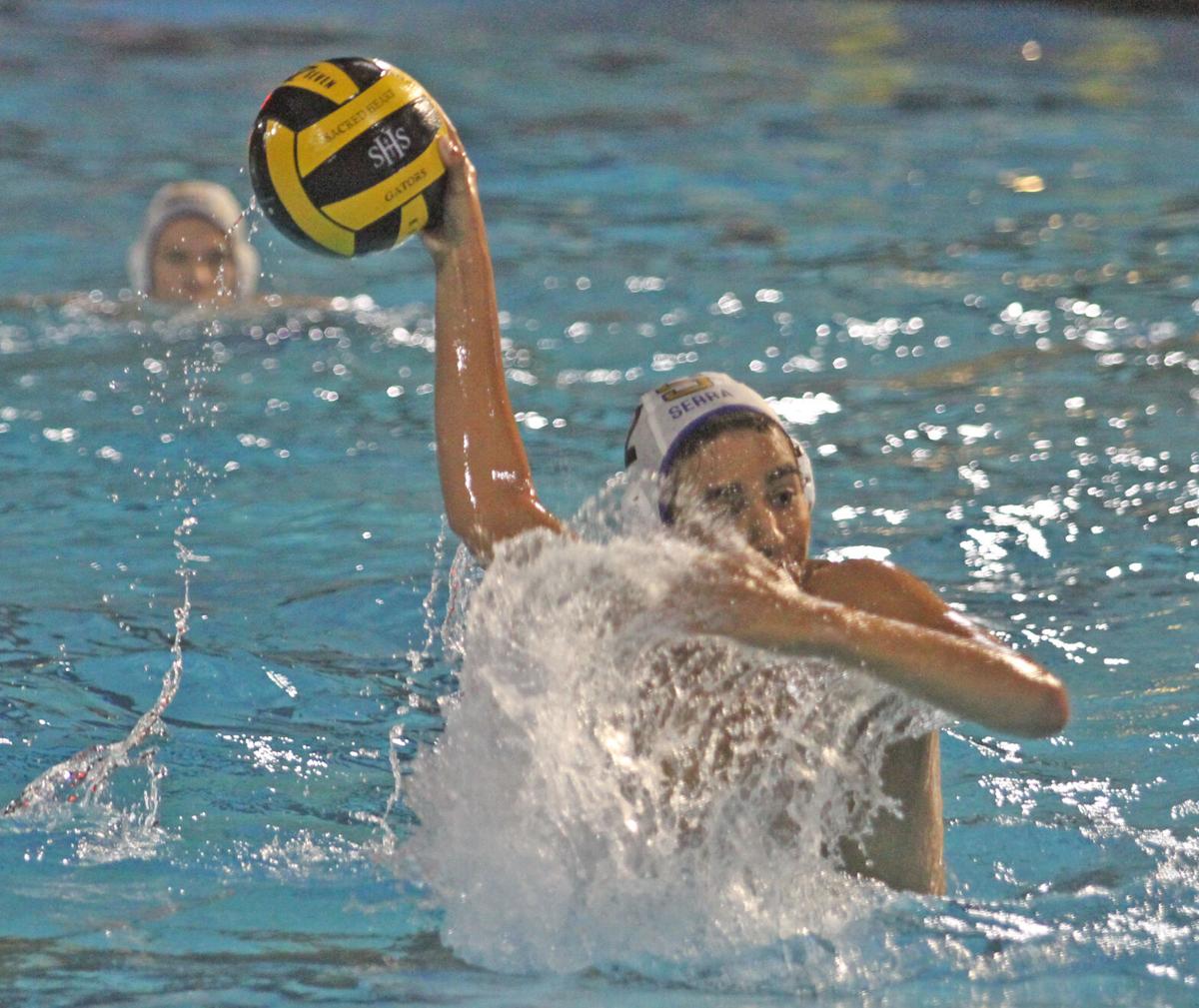 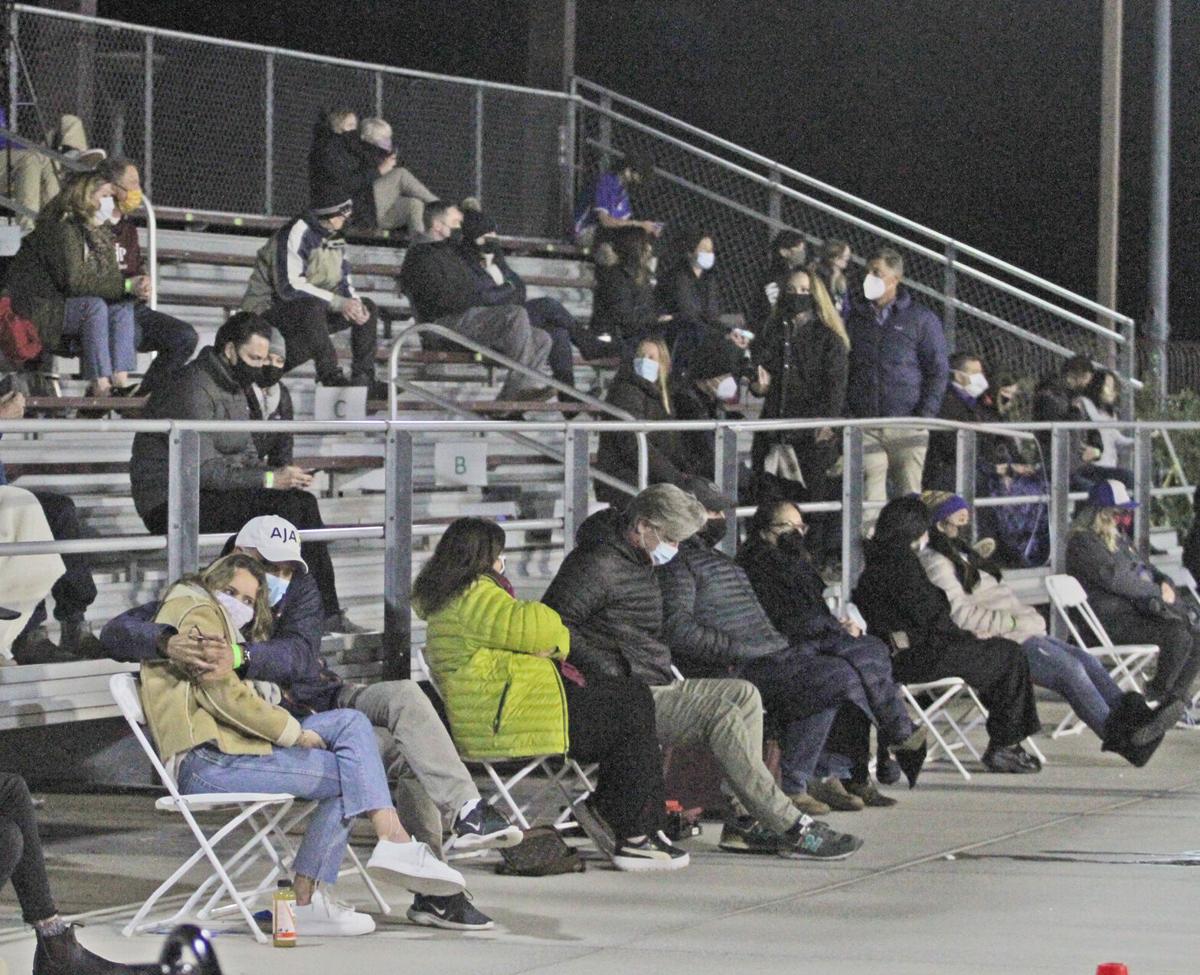 About 60 fans adhered the safety protocols of mask wearing and social distancing.

SHP’s Andrew Plaschke fires off a shot during the Gators’ 16-1 win over Serra Wednesday.

Everyone probably had a pretty good idea how the Serra-Sacred Heart Prep boys’ water polo match would turn out. The Gators are, year in and year out, one of the best programs in the nation.

Serra, on the other hand, is starting a new era with Andrew Silva, a Morro Bay transplant, who was making his Padres’ debut as head coach.

Yet after a 16-1 SHP thrashing, both coaches talked about the sheer satisfaction of actually playing again.

“We’re thankful for the opportunity to compete,” Silva said. “I was probably a little rusty. Obviously it’s the first time we played together.”

SHP head coach Brian Kreutzkamp was equally thankful to see the teams back in the pool for an official West Catholic Athletic League, something he didn’t think would happen during the 2020-21 season.

“It was a really satisfying feeling that we had a real game,” Kreutzkamp said. “Especially for the seniors. We didn’t think they were going to get anything.”

While it was the first game as a team for the Padres as constructed, the Gators have definitely had a head start in developing their team chemistry as every player from 2019’s Central Coast Section Open Division championship team returned. The Gators then added a pair of Division I talent transfers — Michael Heller from M-A, who helped lead the Bears to the 2019 Division I CCS title, and Gavin West from Connecticut.

That chemistry was evident from the start as SHP jumped on Serra early and left no doubt who the better team was.

It took a little more than two minutes for the Gators to get on the scoreboard and then they flooded the Serra goal as they scored 10 times in the first seven minutes, connecting on 10 of their 12 shots in the period.

Luke Johnston got the scoring started as he converted a man-advantage goal from the left wing at the 5:58 mark of the first. Isaac Rotenberg netted his first goal of the game off an assist from West for a 2-0 lead before West scored the first of his two first-period goals for the Gators and the rout was on.

West would lead the offense for SHP, finishing with three goals as the Gators got goals from 11 players. Johnston, Jake Tsotadze and Hassen Hove each added a pair of goals. Heller, John Kirincich, Tyler Hogan, Rotenberg, Luke Hammarskjold, Luke Bachler and Harrison Rohlen each scored once for SHP.

Kreutzkamp was especially impressed with West, who was a member of the junior national team.

“He’s a nice addition to the program,” said Kreutzkamp. “I knew his speed was elite, but when you have him breaking like that … he and (goaltender) Griffen Price are going to be quite the combination.”

As fluid and dangerous as the SHP offense was, the Gators’ suffocating defense was just as good. They started the match with their high press and Serra could not get into any kind of flow on offense. In the opening quarter, SHP came up with five steals and forced the Padres into eight more turnovers as Serra could not even muster one shot on goal in the opening seven minutes.

The Padres first shot did not come until the 4:48 mark of the second period when Mikey El-Badry managed to get off a shot from the point. But Serra appeared to settle in and played better over the final three periods.

“The first quarter was about being here (and playing again),” Silva said. “And getting better on each possession.”

Serra finally got on the scoreboard with 3:14 left in the first half when Travis Murphy drew a penalty shot in the hole set. El-Badry took the penalty shot and buried it for the goal.

SHP, to its credit, pulled back the offense after the 10-goal, first-period explosion. The Gators had more ball dumps , when they would just throw the ball to the corner before the shot clock expired, than goals over the final three quarters — eight dumps to six goals.

Kreutzkamp is cognizant of the sportsmanship needed at the high school and does not want his team to run up the score on anybody. It’s part of the culture at SHP and the players have bought into that philosophy.

“We have this conversation with the kids,” Kreutzkamp said. “We’re pretty spoiled here and at some time, [the players] will be on the other end of this.

“But we’re always going to go full speed on defense.”