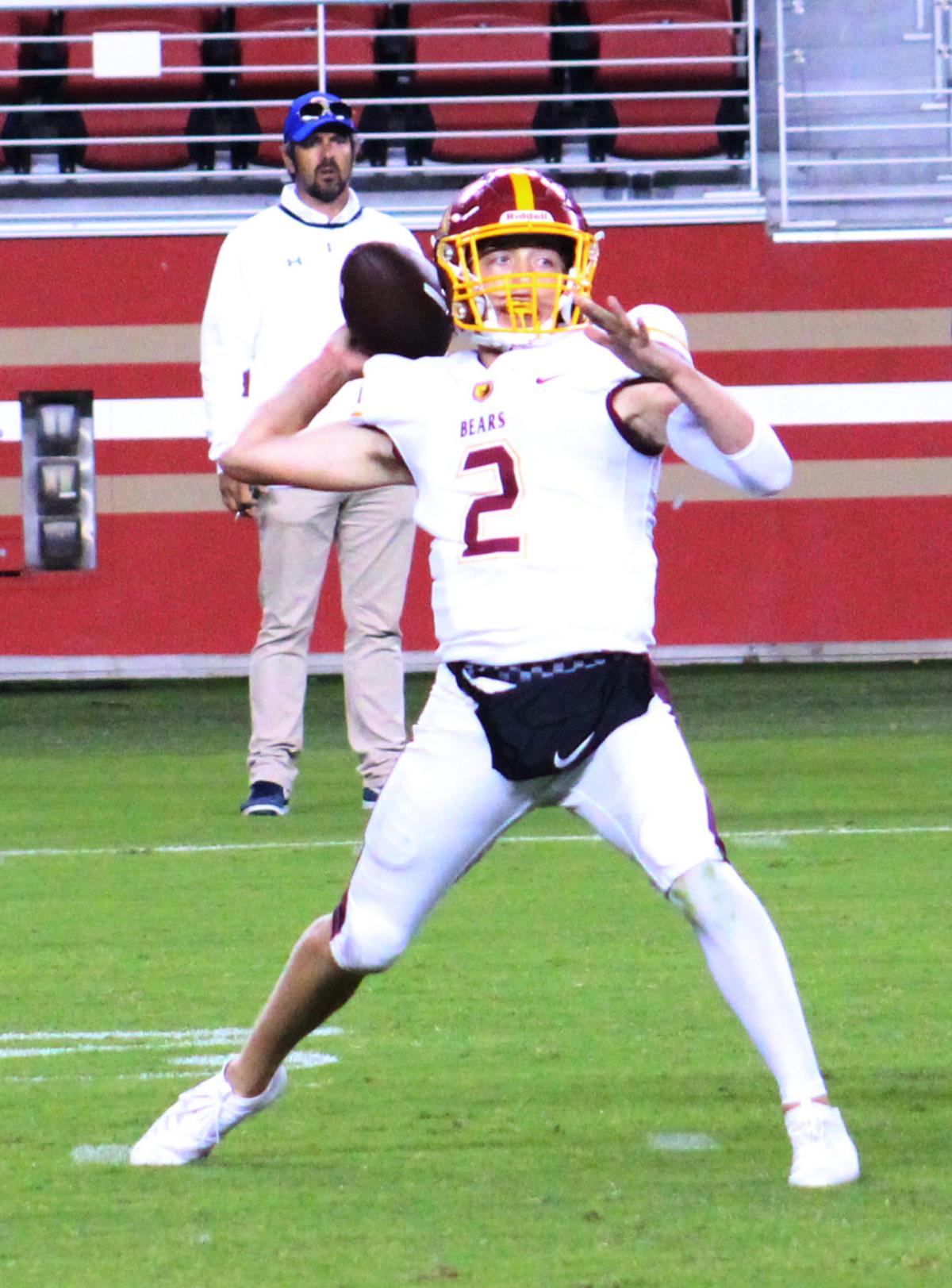 Menlo-Atherton quarterback Matt MacLeod throws a pass in the first half Friday night at Levi’s Stadium. 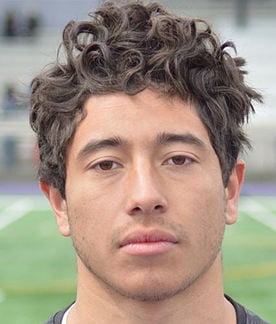 Serra defensive end Nusi Malani celebrates after recovering a fumble in the second of the Pades’ 38-13 win over M-A at Levi’s Stadium.

SANTA CLARA — The Serra Padres fans closed out the night chanting: “This is our house!”

The Padres (2-0 overall) certainly seemed at home playing in the Levi’s Stadium High School Series on a picturesque night at Levi’s Stadium, strutting to a 38-13 victory over Menlo-Atherton (1-1).

Nate Sanchez did it all for Serra, going for 122 total yards and five touchdowns, along with a 29-yard pass earlier in the game. Add to the highlight reel the Padres’ defensive possession after putting the game away late in the fourth quarter, when Sanchez wasn’t too consumed with who’s house it was, but was more keen to stand behind head coach Patrick Walsh on the sideline to yell at the defense: “Wrap up!”

“Our veins are blue and when you cut open Nate’s veins, it comes out blue,” Walsh said. “He is a Serra Padre. He is kind of the poster child for Serra football. … He’s just a fantastic human being, so he deserves it.”

Once Sanchez helped senior quarterback Daylin McLemore open up the offense, the Padres seemed quite comfortable through the second half. In the first, though, it took time for the Padres to get their feet on the ground, with neither team reaching the end zone until the second quarter.

“The lights got to us maybe a little early,” Walsh said. “But the good news was we hung together as the Padre brotherhood. And that’s all I care about.”

Serra didn’t waste any time getting on the board but relied on its senior kicker Damon Lewis to cap the opening drive with 3 points. The Padres stalled out inside the M-A 10-yard line midway through the first quarter. On second-and-goal from the 9, Serra running back Vince Poni was dropped for a loss by senior linebacker Christian Van Stralen and junior David Taufui. Then on third down Poni was held to a 5-yard gain, brought down by senior linebacker Sasongi Eke.

It took another 12 minutes for anyone to crack the end zone, but McLemore aired out a 42-yard pass to Sanchez to advance the ball to the M-A 6-yard line. It took the Padres four plays to get into the end zone, but an inside curl pass from McLemore to Sanchez cracked the goal line to put Serra up 10-0 with 6:56 left in the half.

“If you throw the ball, you can run the ball,” Sanchez said. “And once we were able to do that, our whole playbook opened up.”

Then a critical turnover on the first play of the ensuing drive set up Serra for another quick score. M-A was having trouble snapping the ball to the quarterback all night — the Bears lost their second-string center earlier in the week and had to rely on their third-stringer — and botched a shotgun snap that saw running back Francisco Sanchez avert immediate disaster by wrestling the high, tipped snapped out of the air. But Sanchez couldn’t finish the run, getting stripped by junior linebacker Finn Williams for a fumble recovery by Serra defensive end Nusi Malani.

“Finn just came out of nowhere and knocked the ball out, and I just tried to scoop it and score,” Malani said. “… I felt like our Serra community just came together as one. It just turned the tide after that.”

Serra scored five plays later, this time going to Sanchez on third down for a 9-yard scoring toss to up the lead to 17-0.

M-A was playing the tempo game on offense through the first half, going no-huddle and rushing to the line of scrimmage. The Bears sprung two big pass plays on the ensuing drive, with MacLeod hitting sophomore Jalen Moss for passes of 43 and 39 yards, the second getting into the end zone to make the score 17-6.

The Bears looked like they might turn the game around two plays later when cornerback Justin Anderson came up with as acrobatic of an interception as anything you’ll see at Levi’s Stadium this year, sweep across the field laterally on a long shot downfield to Sanchez, leaping crossways and nabbing the ball while in midair.

Three false start penalties and three plays later, however, MacLeod was intercepted by Serra senior Will Mauer, taking the wind out of the Bears’ sails. They slowed down their offense after that.

“We got behind,” Papin said. “… And then the snaps. When we’re playing behind the chains, it’s hard against a great team like that.”

Serra took advantage of the turnover, scoring three plays later when Sanchez got behind the defense again for a 42-yard touchdown reception. He added a 5-yard scoring run at the end of the third quarter. Then in the fourth quarter, with much of the second-string offense on, Sanchez jogged back out in the red zone on third down to score the dagger on a 1-yard scoring run.

“That was more to put the dagger into it,” Sanchez said.

McLemore finished the night 18-of-22 passing for 197 yards, two touchdowns and two interceptions. The senior added eight carries for 37 yards.

The duel between star receivers M-A’s Troy Franklin and Serra’s Terence Loville was fun to watch. The highlight came between Moss’ two long catches in the second quarter when M-A took a shot downfield for Franklin, being guarded by Loville in tight 1-on-1 defense. Franklin had to come back for a lofted throw, and timed the ball well, but Loville stuck with him to break it up for an incompletion.

Franklin finished with four catches for 47 yards. Loville totaled five catches for 85 yards, including a 29-yarder from Sanchez.