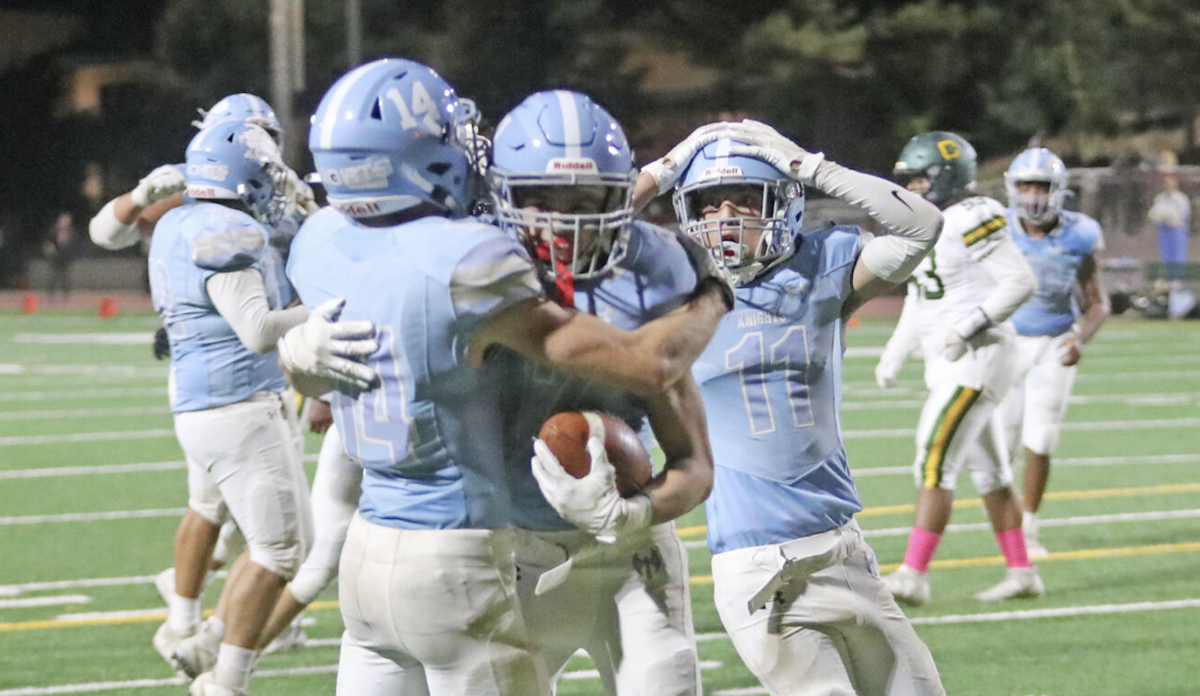 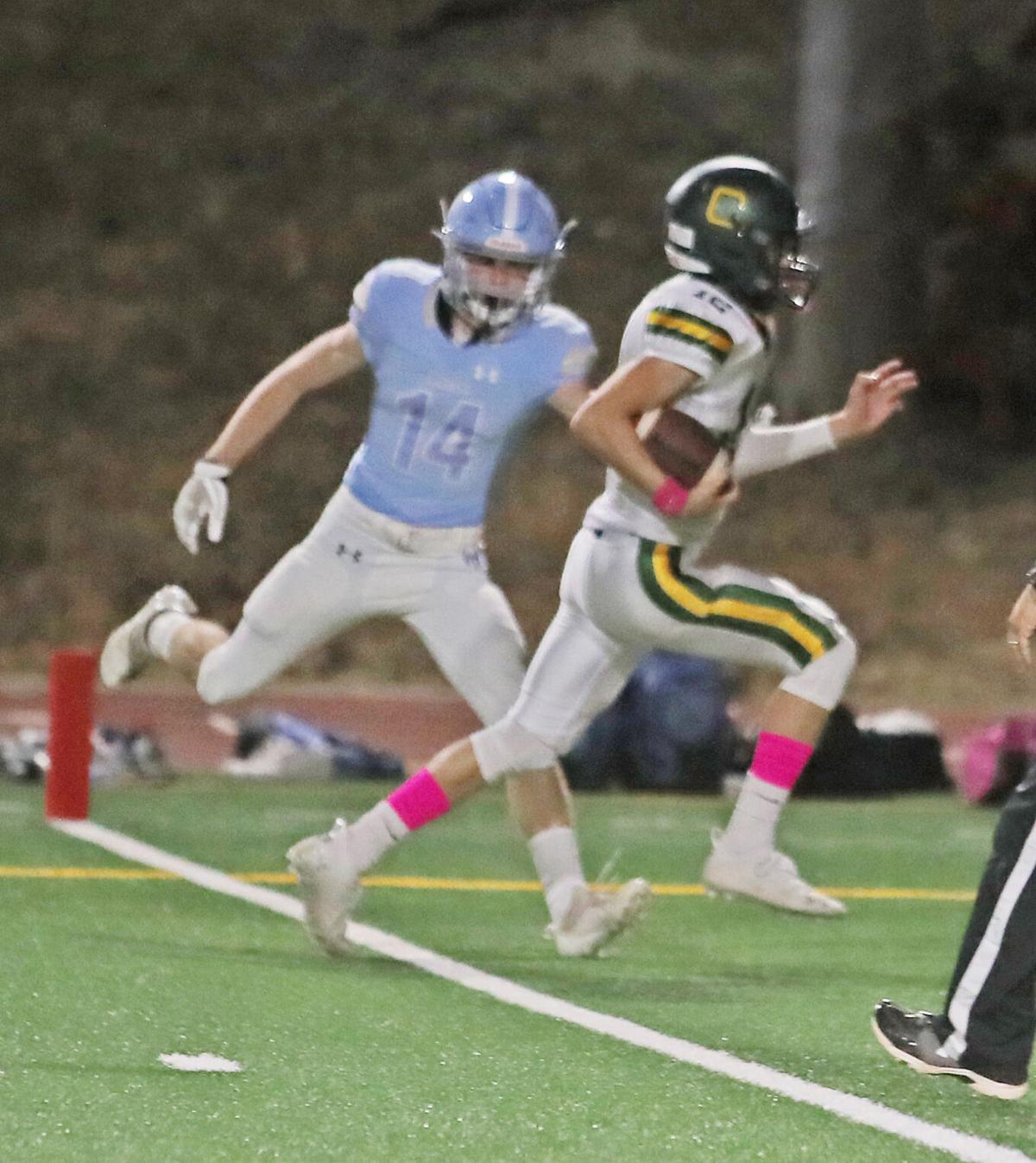 Capuchino quarterback AJ Rich scores from 12 yards out to give the Mustangs a 7-0 lead in the first quarter.

Tyler Douglass caught a tipped pass for a touchdown and Zach Leighton’s extra point proved to be the difference as Hillsdale rallied for a 42-41 overtime win over Capuchino Friday night.

Leighton’s kick was the winning point because the Hillsdale defense stopped Capuchino short of the goal line on its 2-point attempt after scoring first in overtime.

“[Hillsdale is] a good football team and we have to play to the last second,” said Capuchino head coach Jay Oca, who said he and his coaching staff agreed before overtime that the Mustangs would go for 2.

The fact the game even got to overtime baffled Oca and the Mustangs. When Isaac Nishimoto barreled into the end zone from 2 yards out, Capuchino had a 35-21 lead with just over three minutes to play in regulation.

And even though that proved to be enough time for Hillsdale, everything had to break the Knights way.

Hillsdale quarterback Liam Smith did an excellent job in leading the Knights to two late scores. Starting from the Capuchino 42, Smith methodically led the Knights down the field. Facing a fourth-and-10 at the 30, Smith scrambled for 10 yards, on the nose, to keep the drive alive. Smith converted another fourth down with a 4-yard gain and on the next play hit Douglass with a 7-yard touchdown pass.

The Knights failed on the 2-point conversion and trailed 35-27 with 58 seconds to play.

All Capuchino had to do was recover the inevitable onside kick. Instead, Matt Spivak raced 10 yards and snatched the ball out of the air for Hillsdale to give them a chance to tie the score.

“If we recover that onside kick, it’s a different game,” Oca said.

Which the Knights did, doing it the hard way. Facing a fourth-and-1 at the Capuchino 37, Smith scrambled around until he found a wide open Caden Wellwood, who made the catch and took the ball down to the 10.

Following an incompletion, Smith hit Danny Aspillera with a 10-yard touchdown strike. Still needing the 2-point conversion to tie, Smith took the snap and rolled far to his right — before throwing the ball back all the way across the field to the left corner of the end zone where Wellwood was all alone, who cradled the ball to his stomach to tie the game at 35 with 24 seconds remaining.

It was a strong finish for Smith, who struggled for most of the second half. He did, however, complete 18-of-30 passes for 295 yards and four touchdowns. He also rushed for 50 yards.

Leighton had the best game of his career, catching six passes for 133 yards and two scores, while adding a third touchdown on the ground.

Capuchino took the ball first in overtime and Nishimoto scored from 2 yards out. But the Knights stacked up the Mustangs on their 2-point attempt, giving Hillsdale a chance at the win.

Until the final three minutes, it looked like the game was going to be decided by inches, with Capuchino coming out on top each time. On the final play of the first half, the Mustangs defense stopped Aspillera inches short of the goal line, preserving a Capuchino 21-14 lead at halftime.

Then late in the third quarter with Capuchino holding a 28-21 lead, the Mustangs prevented the Knights from tying the score with a goal-line stand that culminated in a stop at the 1-yard line.

With the way the Mustangs were playing, it appeared that might be enough. Hillsdale had trouble slowing down Capuchino workhorse Nishimoto, who rushed for 202 yards and three touchdowns.

“[Nishimoto] is fast, he’s athletic, he has great vision and he seems to have a second burst,” Parodi said.

Capuchino quarterback AJ Rich also had a strong performance. He capped the Mustangs’ first drive with a 12-yard scoring run and completed 4-of-6 passes for 65 yards and a touchdown.

After Rich scored from 12 yards on the first drive of the game, Hillsdale answered with a 10-play, 65-yard drive that was capped by a Smith-to-Leighton 11-yard touchdown pass.

Following a 40-yard kickoff return from Nicholas Caruso, Capuchino took over near midfield, overcame a sack and scored on a Rich-to-Brandon Beane 28-yard hook up to put the Mustangs up 14-7 early in the second quarter.

After both teams came up empty on their ensuing drives, Hillsdale tied the score when Smith found Leighton for a 59-yard score with 4:40 left in the first half.

But Capuchino rebounded nicely, responding with a seven-play, 63-yard drive that culminated with Nishimoto blasting into the end zone from 5 yards out to give Capuchino a 21-14 lead at the break.

After coming up short to end the second quarter, the Knights received the second-half kickoff and promptly tied the score when Leighton took a handoff on a jet sweep and raced around left end from 4 yards out to cap a eight-play, 65-yard drive.

But the Mustangs answered back with a Nishimoto 53-yard touchdown run for a 28-21 advantage that was pushed to two touchdowns with about three minutes left to play.

“The Ocean Division is a tough division,” Oca said. “We had an opportunity and we didn’t capitalize.”

For Hillsdale, it was just the latest in a string of games decided on the final play of the game.

“We played well when we needed to,” Parodi said. “To watch our kids battle back … was pretty frickin’ cool.”