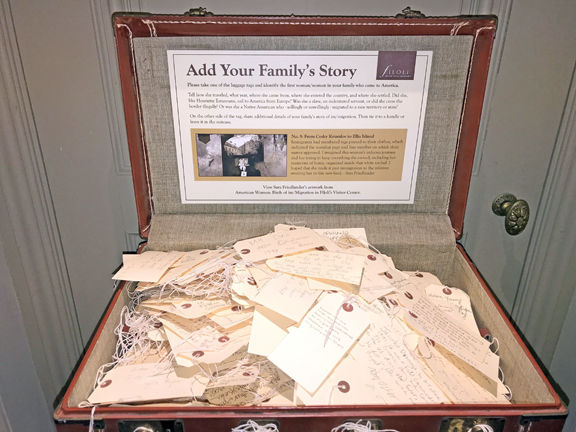 More than 2,500 and still counting! That’s the number of stories handwritten by visitors to the recent People of Filoli exhibit at the Filoli estate which focused on the immigrants who formed the staff at the palatial mansion in Woodside during the last century.

Those who toured the historic estate were asked to write down their own immigrant tales on vintage luggage tags similar to those attached to steamer trunks when ships were the only way to cross the oceans. The exhibit that ended Nov. 10 told of butlers, cooks and other employees coming from many nations and, despite differing cultures, languages and religious beliefs, were able to form a community at the mansion built in 1917.

When visiting the mansion and strolling through its 16 acres of formal gardens, images of immigrants working behind the scenes in the kitchen preparing meals or setting the dining room for a party is not on one’s mind. After all, the estate reeks of wealth. Built by the Bourn family and sold to the Matsons, the mansion was donated in 1975 to the National Trust for Historic Preservation, which ensured Filoli will be enjoyed by the public for years to come.

“The estate was built by and cared for by immigrants, many of whom made a home on the grounds or in communities nearby,” said Hilary King, public programs coordinator at Filoli, an acronym formed from the first two letters of the key words in the motto of the original owner, William Bourn: “Fight for a just cause, love you fellow man, live a good life.”

“Every morning before the estate opens to the public, I check the supply of blank tags and read the newly-written tags,” King said. “The stories are fascinating, heartbreaking and make up almost an overview of immigration in the United States.” Here’s a sampling of what is on the tags: Ireland 1914, 16 years old came to New York alone … Immigrated from Laos in the 1970s to escape the debris of the Vietnam war … Fled Russia in 1885. She was a Jew and left to escape pogroms … WWI refugee. Husband killed, child died in her arms walking to seaport … Freedom flights from Cuba in the 70s.

The tags provide a lesson in history when the older stories are contrasted with those of more recent immigrants. The answer for those in the more distant past seemed to be mainly fleeing their native land: Nazis, potato famine, pogroms. “The answer for those coming now seems to be opportunity, and the idea of what America represents,” King said. More recent tags included: God bless what makes America diverse, accepting country … Moved to USA after waiting 3 years to pursue better and free life in this land … Living the American dream. People back home all dream. Glad to be part of US history now.

The tags are currently displayed in a hallway adjacent to the mansion kitchen where they form a frame around an old census that lists the staff’s native counties with many coming from Ireland or Italy. Filoli’s immigrant past includes William Roth, who was born in the Kingdom of Hawaii in 1881, married Lurline Matson of the Matson shipping line fortune and eventually bought Filoli from the Bourns in 1937.

Roth’s story sounds a bit like that of television’s Downton Abbey’s Tom Branson, the Irish chauffeur who married Lady Sybil. Roth, whose father ran a tailoring business in Hawaii, went to the mainland for high school and graduated from Stanford University. He became a U.S. citizen in 1900. After school, he returned to Hawaii and became a sugar stockbroker. A romantic story tells of a young Lurline Matson stepping off one of her father’s ships, seeing Bill Roth, and instantly falling in love. They were married in 1914 and moved to San Francisco where Roth started working for Matson Navigation, eventually becoming its general manager.