Please log in, or sign up for a new account. Normally, we would require the purchase of a subscription to access our stories but during the shelter-in-place order we are temporarily removing all fees. All we require is that you register for an account.
If you wish to help us in these difficult financial times, you can purchase a subscription below (including ad removal) and/or contribute at sm-dj.com/donate. 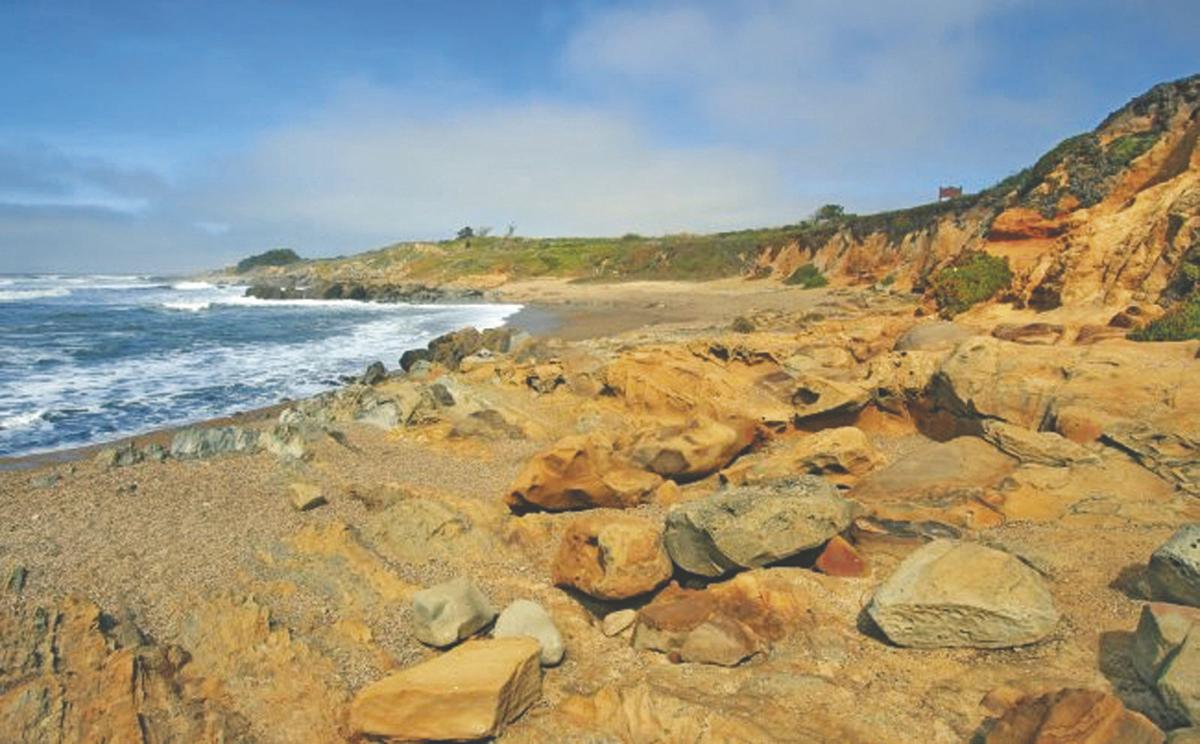 The saga over public access to Martins Beach on the San Mateo County coast had a forerunner in a long, drawn-out battle in the 1890s over Pebble Beach near Pescadero. Closed gates were central to both cases.

Pebble Beach, now part of Bean Hollow State Beach, is not to be confused with the Pebble Beach near Monterey, better known for golf and the 17-Mile Drive than hunting for pebbles, which at one time was the main attraction at our Pebble Beach. The cove, three miles from Pescadero, isn’t called Pebble Beach for nothing. Believe it or not, tourists threw themselves face-down, searching little bits of rock for the occasional prize of carnelian or opal.

An 1867 edition of the Alta California reported that pebbles from the beach were scattered all over a nearby hotel where “one steps on them in the parlor or on the stairs.” The pebbles often made their way to San Francisco where they were displayed in jars on the mantels of upper class homes. The beach was so popular it was mentioned in the 1884 edition of Appleton’s General Guide to the United States and Canada, which said “agates, opals, jaspers and carnelians, of almost every conceivable color are found in great abundance, with a natural polish imparted by the action of the waves.”

All that activity came to an end when Loren Coburn closed the gate in 1891, starting a court fight in which he was eventually declared the winner. One newspaper described Coburn, a wealthy land owner, as “the most notorious litigant in California, figuring in some 1,000 cases.” A closed gate at Martins Beach near Half Moon Bay was also the opening salvo in a battle over public access and property rights. Last month, the California Supreme Court turned down an appeal by beach owner Vinod Khosla for review of an earlier ruling that decided he had to allow access to Martins Beach.

Coburn regarded the beachcombers as mere trespassers. At one point during the legal battle with locals and visitors alike, Coburn was forced to dig trenches and place barricades across the road. Things cooled somewhat in 1893 when the beach was dedicated as a county park. Unfortunately, the park designation failed to ensure that the road was public land.

The closed gate was the ultimate weapon in Coburn’s arsenal. His earlier attempts at turning back beach goers included telling people the road to the beach was unsafe. He put up fences and gates with signs saying he accepted no liability for any injury resulting from unauthorized use of his land. The permanent closure of the gate in September of 1891 was a first.

The San Mateo County Times and Gazette said Coburn “claims he owns Pebble Beach and all the pebbles. The people are expressing their indignation at this move and the children are in open rebellion at the usurpation of what they considered their rightful playground.”

Coburn insisted in court that he owned the land under a Mexican land grant and had paid taxes on it. He stated that if he didn’t own the pebbles and had no right to close off people’s access to the ocean, then he had no rights at all.

In July 1896, a judge decided that the beach was state property and so were the pebbles. Another part of the decision banned the public from entering Coburn’s property on the road from Pescadero. That part was enough for a newspaper, the San Francisco Call, to run a headline saying “Coburn Wins His Suit.” The decision, it pointed out, dashed county plans to build a resort at Pebble Beach.

Today, there is no problem about access to the beach. Just don’t take the pebbles! Remember, they are state property.

The cost of our beaches: Priceless